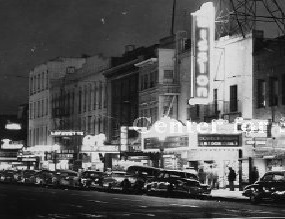 The Majestic Theatre dates back to at least 1911. On November 29, 1926, a Wurlitzer 3 manual 10 rank theatre organ was shipped to the Majestic Theatre. It was installed, but later repossessed by the Wurlitzer company. The instrument was reconfigured and enlarged to a 4 manual 12 rank and shipped to the new Granada Theatre, Tooting, London, UK in 1931, where it remains today.

The Majestic Theatre was last known as the Mission Theatre.

A card in the California Index says that the opening of the Majestic Theatre is mentioned in the April, 1910, issue of Grizzly Bear, which was a regional monthly magazine. The owner of the building was named Jake Zemansky.

The Sacramento section of an 1898 California telephone directory lists Jake Zemansky as the proprietor of an establishment called The Palm, at 225 K Street. Whatever The Palm was, it must have been a classy joint of its type, since it had a telephone in 1898. And, apparently, it was profitable enough that Jake could afford to build this fancy nickelodeon in 1910.

In 1913, the Majestic Theatre was one of three Sacramento movie houses being operated by Charles William Godard, the others being the Acme, which he had opened in 1903, and the Liberty. In 1915, he opened the Godard Theatre on J Street.