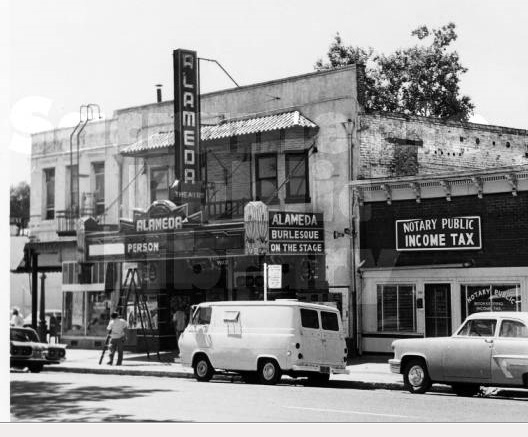 The Alameda Theatre opened as the Nippon Theatre in 1907. The theatre closed in 1960. Any further info on this theatre would be appreciated.

I started working theatres as a teen in Sacto, (see posting on California Theatre). The ‘Alameda’ was also a United California group owned theatre. During my work period,(1949-58) with them in Sacto, the Alameda was mainly a ‘live striptease’ house with many of the notable names of the era, Tempest Storm for one. I do remember ‘volunteering’ to delivery items or do anything else…just to get a young education. JCL

JCL is correct. I was in high school in Sacramento from 1959 to 1963 and the big deal was to try and get in the Alameda. I succeeded one night with my false ID in 1962 or 63. It was a live striptease with a drummer and one or two girls with pasties on. It was a classic place with one center aisle and maybe 10 seats in the rows on either side. Too bad they had to tear this place down for “modern” redevelopment. Mike

Glad to hear that another ‘fan’ is still around. Your memory still very good. Thanks for the ‘jog’ on mine about seating. Was it also the, (standard) extended runway, which went maybe another 15ft or so, to let the performers strut down a bit closer to audience?

Since you were going to school,(a few years earlier I was at McClatchy). Do you remember the Studio/Encore on K st next to the Esquire. It was a small theatre, later a Hispanic venue, and now I believe a small restaurant. I was ‘loaned out’ one summer to assist in management. They had a bad tragedy on a saturday matinee. I had all the Sacto Bee clippings, (but lost over the years) and now have been compiling about many of the old houses. If you have any recollection, would appreciate. Jim

JCL Sorry I can’t remember the runway as I was engrossed in anatomy not architecture. I just remember she was real close. In do remember the guy playing drums. I don’t live here anymore but back for a couple days this weekend and I can’t tell you how much I hate that Macy’s. I went to El Camino and you know we’d come downtown on Friday nights after football and b ball game to cruise K. Take care. Mike