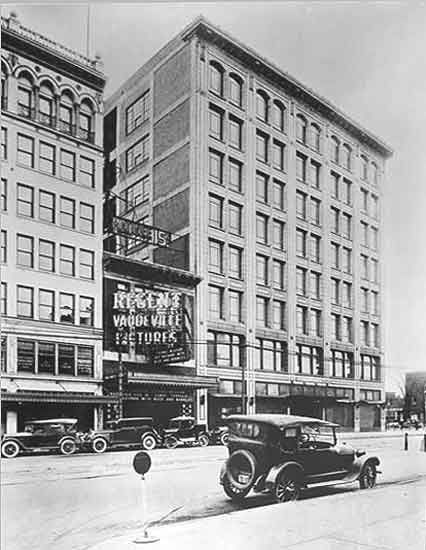 One of Detroit’s larger neighborhood houses, early claims by its original owners that the Regent Theater sat over 3,600 seem a bit exaggerated. It most likely sat closer to half that amount.

Opened September 17, 1916 as a movie theater. The Regent Theater was designed by the firm of Stratton & Von Schneider.

It was later operated by United Detroit Theaters, and remodeled in 1953. It closed six years later.

In 1961, the theater was rechristened the Center Theater and opened with "One-Eyed Jacks".

It was modernized a decade later, but closed once more, for good, in 1974 and razed the next year.

The Regent re-opened in 1961 as the “New Center”. The Studio chain open a new theatre called the Studio New Center about a mile west of the old Regent, located on Third ave. & West Gand Blvd. in the middle 60’s.

The Regent re-opened in 1961 as the “New Center”. The Studio chain open a new theatre called the Studio New Center about a mile west of the old Regent, located on Third ave. & West Gand Blvd. in the middle 60’s. PS: The New Center was used as a Training Center for the Union Projectionists

Hold on for a minute here—we have some confusion going on re: the three theatres that have been in this part of town (New Center area) all withthe name “Center”. This Theatre (above listing at 7314 Woodward ave.) was built in 1916 as the Regent and was HUGE, over 3,000 seats. I was in this theatre just before it was demolished and it was truly huge, and in very good overall condition at the time if its demise.
The “New Center” you refer to above was a modern cinema in a much newer (1950s-‘60s) building on the Boulevard and third (that part is right), it opened while the Regent was going under the name “Center”, and yes, that “New Center” cinema was part of the Studio chain. I worked at the Studio 8 and Studio 4 in 1975-'77, then under the ownership of the infamous Gorelicks.
There was another theatre on Woodward, built in 1932 as the Trans-Lux, it was renamed the “Center” in 1934, it closed in 1949 and the building was remodeled into retail space.

1)The New Center was on The Boulevard and had no connection to the Regent/Center on Woodward.

2) The Regent theatre on Woodward was renamed the “Center” and was open with that name WHILE the “New Center” was open on the Blvd.

3) there was another theatre on Woodward named the Center, it held that name before the Regent was renamed and the New Center Cinema was built.

I recall that a (live) theater troupe ran the new center as a live theater in the early 80s.

Here is a photo circa 1920s:
http://tinyurl.com/dblbkr

There is an early photo of the Regent Theatre on this page of a promotional booklet published by the Federal Cement Tile Company of Chicago in the 1920s.

The principals of the architectural firm were William B. Stratton and Dalton J. Von Schneider.