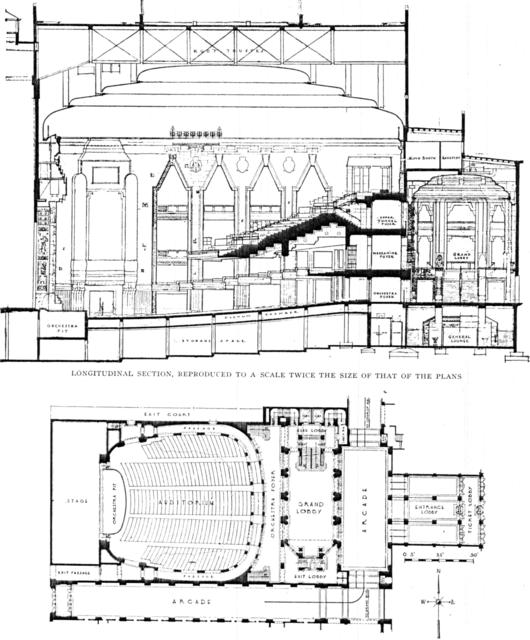 Opened as the centrepiece of the Kunsky circuit on November 16, 1928 as a vaudeville and movie house with Corrinne Griffith in the movie “Outcast”. The Fisher Theatre is a unique Detroit example of a Mayan-style movie palace.

Designed by the architectural firm of Graven & Mayger, one of their first commissions, the Fisher Theatre could seat 2,715 in its plush auditorium seats. The interior featured two balconies, an orchestra pit, a 4-manual/36-rank Wurlitzer organ, and in the lobby, a goldfish pond, real banana trees, and macaws which patrons could feed by hand while waiting for the next show.

In the early-1930’s, the theatre was operated by Paramount-Publix and became home to the 40-piece Sam Benavie Orchestra as well as elaborate stage acts.

By the 1950’s, the stage shows were gone, and the Fisher Theatre began showing only films.

Its Wurlitzer was removed in 1956 and installed in the Senate Theatre.

For the last few years of the 1950’s, the Fisher Theatre became a second-run house and screened its final movie “The Magnificent Seven” in 1960.

The next year, the Fisher Theatre was acquired by the Nederlander Theatrical Corporation, which hired the firm of Rapp & Rapp to remodel the theatre at a cost of $3.5 million. It reopened October 1, 1961 with a pre-Broadway production of the musical “The Gay Life”.

It was decorated in an elegant, subdued style, using black marble, walnut paneling, imported crystal chandeliers and decorative metal-work. Seating was reduced to just under 2,100 for more comfortable seating. The Aztec statues which once graced the Fisher Theatre are now outside on private property Northwest of Port Huron, MI.

For over 40 years, the Fisher Theatre has continued to be the preferred destination of touring Broadway shows in Detroit, with such stars as Joel Grey, Lynn Redgrave, Bernadette Peters, and Mary Martin gracing its stage.

Stevebob, please don’t misunderstand…I also appreciate a modern design as well. I’m a big fan of The Ziegfeld in New York, which is approaching its 40th anniversary and therefore will become eligible for landmarking. My comment about the Fisher was more about what was lost than what was gained. The old Mayan design appeared to be spectacular and the new design pales in comparison.

By the way, The current Ziegfeld is the latest incarnation of that theater. The original was just down the block and, it too, was an incredibly beautiful theater that was a shame to lose. As much as I love the current Ziegfeld, it too doesn’t hold a candle to the original.

Restorations can be a catch 22, but it always helps the economy and boosts neighborhood appeal.
I direct a non-profit organization to promote the arts and culture exchanges within our region in Miami, FL(BRAC).
We have been in desperate need to find classic, not restored theater seats… and well in Florida they are not easy to come by…
If someone ere knows how I may be able to contact these people,I will greatly appreciate it, please drop me a line. we are dying to get our hands on some classic original seat.
B. Pernaris
BRAC

Here in Downtown Los Angeles, there is the most exotic Mayan Theater which now a nightclub. Opened in August, 1927.

When the Fisher was remodeled in 1961 there were a pair of Bauer U2 35/70mm projectors installed for occasional film shows. Does anyone know if they still have film capability?

By the late 50’s the Fisher Theater only screened second-run movies, but it was still a first class operation in every other respect. It was always a special treat to go to the Fisher no matter what was playing, because the Hollywood palace was a visually entrancing masterpiece.

We used to go to a picture show every Sunday evening after dinner when I visited my father and stepmother in Detroit during the summers in the 1950’s and this family tradition continued when I moved to the Motor City in 1957. I soon learned how to get around the city by bus to see different movies playing on Saturdays after completing my chores. The first-run downtown theaters and the Fisher were my favorites – and the most expensive – but that didn’t stop me because I was hooked on big city style and grandeur.

I left Detroit for good when we relocated to Los Angeles in 1959. I have been back several times since and was completely devastated by the destruction of a once proud and vibrant city.

My fondest Motown memories are the Michigan Central train station, Hudson Department Store, Fox Theater, Fisher Theater, Woodward Avenue streetcars and Sanders deli which seved the best hot fudge sundae made with real hot caramel. I miss the annual Thanksgiving Day Christmas Parade on Woodward and the dazzling movie marquees that lit up Grand Circus Park fronted by an outdoor newsstand – next to the public toilets – where I bought (or stole) little pocket sized male physique magazines hidden between the mattresses.

I met a gentleman who worked at the remodeled Fisher for a number of years – asked him if any of the original auditorium details exist behind the new walls and ceiling. He said that during the conversion, all of the original auditorium details were ripped out except for a small part of the ceiling and back upper walls at the very back of the balcony. From the pictures at their website, it looks like the main lobby was also remodeled, but the big arcade outside of that still has the original ornamentation.

Yes, the large entrance arcades are original, but their architectural style is markedly different from the Fisher’s original or remodeled interior. There are some fragments of the original decor on display in a case at the top of a staircase in the lobby.

Fascinating; the modernizaton of the Fisher was probably, if not definitely, the last theater design project of the Rapp & Rapp firm before it was dissolved; the two brothers had passed on well before 1961. Many now regard this design as looking very dated, whereas the entrance arcades, which are original and in a very different design, now look classic.

It is interesting too to read that even after the redo, the Fisher had, perhaps still has, has motion picture projection capability, but it would appear to have rarely used; perhaps occasionally for special events or trade shows, but I can’t recall any public showings there since it became a well-known house for Broadway shows.

This link has 32 photos.