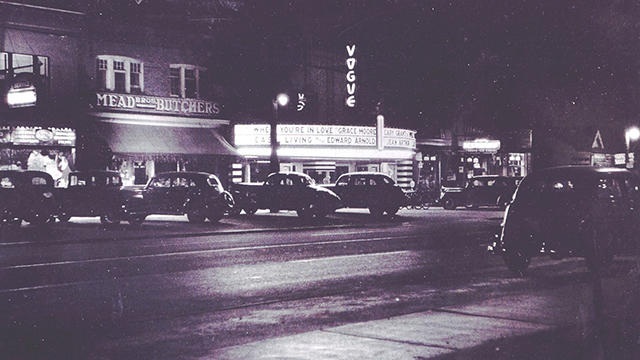 The Vogue Theatre was located in downtown Port Credit (Mississauga), Ontario and opened in 1949. It was owned by 20th Century Theatre until 1970. It was renamed Credit Cinema on 10th June 1971.

After closing it was converted into a pool hall, and is now a restaurant/sports bar named the Crooked Cue.

THAT’S their Etobicoke location LM…the one here it the Mississauga (Port Credit) location. If you google The Crooked Cue it comes up with the former Vogue theatre location.

Here is a picture of the former Vogue Theatre in Port credit; when the picture was taken, the former theater was serving as a music store.

The re-opening as the Credit Cinema took place on June 10th, 1971 with a double feature of HOW TO SUCCEED WITH SEX and NAKED AND FREE.

The movie listed on the marquee was released in 1963, so the photo would have been taken at a later date than 1950.

Great photo but couldn’t it be uploaded to the photo section. Links are easily broken.