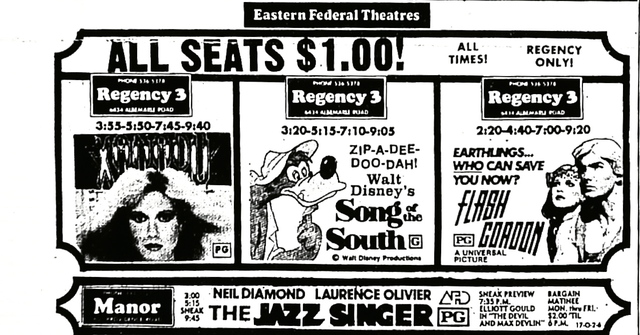 Owned and operated under Charlotte based Eastern Federal Corporation, the Regency 1 & 2 Theatres opened on August 8, 1975 with Lorne Greene in “Tidal Wave” & Joe Don Baker in “Mitchell”. It screened first run features. On December 28, 1979 a third screen was added and it became a second-run discount house. By 1981 a fourth screen was added, making it Charlottes first four screen discount theatre under Eastern Federal. It remained Charlottes premier discount theatre until its closing in the mid-1990’s.

The Regency Theatres were built and operated by the Eastern Federal Corporation. It was a first-run theatre when it opened. I believe it became a dollar-house sometime between 1982-85.

Worked at this theater off and on for a couple of years between 1989 and 1991 during my high school days.

It was already a dollar house by the time I worked there. The front of the building was a huge series of glass windows, so you can see essentially a cross section of the entire theatre from the parking lot. One huge concession stand in the middle with a big house on either side, with a smaller concession on the west side next to a smaller house. The east side also had a concession and the game room attached to it.

Regency was not known for its sterling condition, and even though it lasted a few years after I left, even during my time, it was pretty run-down. The only reason we kept ‘em coming back was the $1.00 admission price. I remember a time where they tried raising the price to $1.50 and people stayed away in droves. Yes, fifty cents made that much of a difference.

The Eastern Federal Corporation ran the theatre…shall we say economically. The management and staff contained the expected mix of the good, the bad and the ugly. There were a number of strange events that would take place on the weekends when the full teenager crowds were out and about. In the abandoned lot next to the west side of the theatre, there would huge gatherings of kids who would often show off their souped up vans and cars, and also their various types of weaponry, including nunchuks. It was my job, when working the west concession stand by myself, to keep anyone from entering the side door adjancent to that lot. Needless to say, I never prevented anyone from that group from entering if they felt like it. I found it hard to reconcile a cracked skull against the loss of one dollar admission.

I remember in 1989 just as the movie CASUALTIES OF WAR opened there, Charlotte was slammed by Hurricane Hugo which effectively broke the city for a couple of weeks. I ended up spending a lot of time at the Regency as they hard partial power and my house did not for several days. I also remember that the hurricane blew out the full sized marquee in the parking lot. There were letters and white plastic everywhere.

One of my favorite mental images of the Regency had to do with their way of advertising for help. They had a pretty high turnover rate there, so they were almost always looking for people, so they would just add the legend, “NOW HIRING” to their marquee out front. This would inevitably lead to some unintended grammatical hilarity. For example, drivers passing by the theatre during a certain week in 1994 would often do a double-take at the Regency’s marquee bearing the message “NOW HIRING NATURAL BORN KILLERS.” That’s only one example of course, but its my favorite.

Time eventually caught up with the Regency and it (along with the small strip shopping center attached to it) was leveled to make way for new development. The property on which the Regency sat was at the foot of a slightly sloping incline that was then completely reshaped and raised up to make it level with Albermarle Road. On the property now sits an Aldi Foods, and the physical space where I used to sweep up, eat popcorn, and engage in other various types of theatre tomfoolery is now a couple dozen feet underground. The land was reshaped to such a degree that the parking lot literally is the same level as the ceiling in the theatre used to be.

There’s nothing left now of the theatre except a small hole where the pole for the marquee was once placed.

thanks Micheal great story,bet you wished you had a picture of the “now hiring,Killers” marquee.

Great story mfelsher. I guess I should admit that I worked at the Regency, Spring 1976 – Fall of same year (part of my senior year in high school). Concession and/or box-office. First run house in those days. You are right – it did sit at the bottom of a sloping hill. The only thing that is still ‘original’ from my day is the Wendy’s. Pizza Hut used to sit in front on the road but it later moved semi-across Albemarle Road. Manager spent way too much time in the office and left the running of the theatre to the staff. That never seemed right. “The Outlaw Josey Wales” played during the time I worked there. I was also involved in a church youth group and sometimes as a “fun night out” they would go see a movie. The counselor approached me and asked if “Josey Wales” was ‘clean’ enough for the group and I said sure. OOPS! I completely forgot about the cussing…oh well, they survived!

The REGENCY 4 closed as a second-run movie house in 1996.

By 1994-1995 it was still operating as a second-run discount house under Eastern Federal Corporation. But when this theatre closed,all of the second-run movies and discounts went to the Park 51 Cinema(way on the other side of town near Pineville)that took over until 2000.

Are ya’ll sure it was closed in 96? I could have sworn I saw Star Trek: Insurrection there back in 1998. Aside from that this place is where I fell in love with movies. It was the only place in walking distance for me at the time, before Delta 6 was built around the corner. I sank so many quarters into the Star Wars arcade cabinet that was in the arcade.