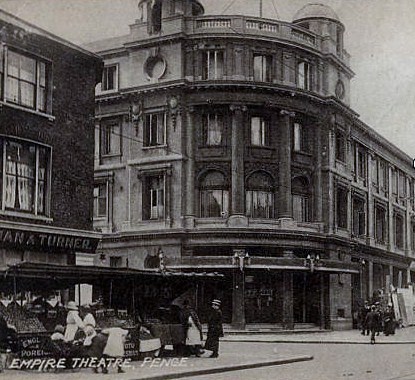 Plans were formulated on 15th September 1913, when Penge Empire Ltd. was registered as a new company, although, due to World War I breaking out, the Empire Theatre didn’t open until 1915. Located on a corner site of the High Street (where Boots Pharmacy is today), Penge in south-east London. The Empire Theatre was designed and operated as a variety theatre. In 1946, seating capacities were 220 in the Fauteuils, 256 in the Stalls, and 160 in the Pit Stalls. The Circle seated 380 and the Gallery seated 500. It had an 29 feet deep stage, a 38 feet wide proscenium and twelve dressing rooms.

It became part the the General Theatre Corporation(GTC) from March 1928 and was taken over by Gaumont Theatres in May 1928. Live show use continued. It was possibly requisitioned by the government during World War II and used for storage.

In December 1946 it was leased to the Moss Empires theatre chain. In 1947 it was purchased by Reginald Salberg. Continuing as a live theatre, there had been some cinema use in the past, when a projection box had been built on the stage and rear projection was used.

It was taken over by the Newcastle based, Essoldo chain of cinemas in September 1949. It was re-named Essoldo in 1950 and retained the rear projection system.

The Essoldo Penge was the first London suburban cinema to be fitted with CinemaScope with four track magnetic Stereophonic sound. 20th Century Fox assisted in the installation. On 7th June 1954, the first film screened in CinemaScope was “The Flight of the White Heron”, a Fox Movietone documentary of the H.M. Queen Elizabeth’s six month tour of the British Commonwealth. The Essoldo closed on 9th April 1960 with Anthony Newley in "Jazzboat" and Ken Clark in "12 to the Moon". The Essoldo was demolished and the site redeveloped.