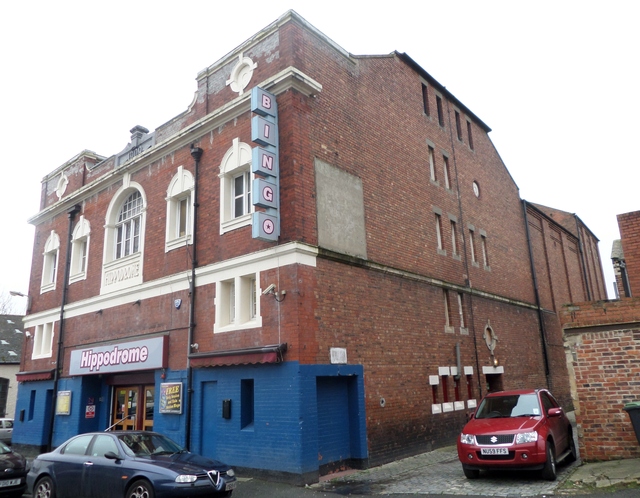 The Hippodrome Theatre opened in December 1909. Designed by Darlington architect J.J. Taylor, with George W. Ward of the architectural firm Owen & Ward. Inside the auditorium there were two balconies and a box on each side of the proscenium. The square proscenium was 24 feet wide, and the stage was 48 feet deep. Films were part of the variety bill from the early days.

In 1920 some alterations were carried out by architect William Stockdale and it became a full time cinema, re-named Hippodrome Picture House. By 1937, it is listed with 900 seats, the upper balcony having been closed off.

It was taken over by the Newcastle based, Essoldo group of cinemas in 1947 and re-named Essoldo. Closed as a cinema on 6th August 1966 with Lloyd Bridges in “Around the World Under the Sea”. It was converted into a Lucky Bingo Club, then Ladbrokes took over and it became a Lucky 7 Bingo Club. Later operated as a Top Rank Bingo Club, it later became an independent Hippodrome Bingo Club. A false ceiling has now been extended across the auditorium beneath the upper circle, so the original plaster ceiling and upper parts of the theatre are no longer visible.

It was designated a Grade II Listed building by English Heritage in April 2012.

The suspended ceiling above the proscenium is apparent in the first auditorium photo. When the place first went over to ‘Essoldo Bingo’ in 1966 the (now unseen) ‘Gods’, which had not been used since its Variety Theatre days, was reopened (and ‘packed to the gunnels’). Players also sat on the stage – and in the aisles! Before anyone says that this was not permissible under Fire and Licensing regulations, I was told about this dangerous practice by my Mother who caught the ‘bingo craze'at a very early stage………….

The stage area is used by bingo players now but it has been specially adapted for the purpose (unlike back in 1966). This modification, like the false ceiling, is reversible and the building could easily be returned to theatrical use. I wonder if it will ever happen? In most locations bingo has now transferred to purpose built out of town establishments so,should that ever happen in Bishop Auckland, perhaps the town could have its equivalent to Darlington Civic Theatre, a former Sister ‘Hippodrome’.

First impressions of photos of the auditorium as a bingo venue are of the stage having been levelled. However,upon closer examination, it can be seen that there are three steps leading up to this area at both sides.

Given that the stalls rake will have been levelled it is probable that there are another couple of steps concealed by the new flat floor and it is therefore likely that that bingo players are on the original stage.

It is 50 years since the building became a Bingo Hall :–

Fine new watercolour by local artist, Eric Thompson uploaded to the photos section. The theatre is depicted as it would have appeared in 1965, one year before closure in 1966 when the town, once with three Essoldo operated venues, was left with only the Odeon which itself would disappear in 1983……..

The Essoldo closed on 6th August 1966 with the MGM film ‘Around the World Under the Sea’.

Article re ‘Hauntings’ in Bishop Auckland :–

Two such phenomena are reported in former cinema buildings,namely the Hippodrome/Essoldo and the King’s.

The former closed in 1966 (not 1960) since when it has been on Bingo and the latter, of which extensive structure only part survives, showed its final film in 1962.

Stan Laurel’s father’s theatre was the long lost Eden (former Theatre Royal) and I am unaware of him having any connection with the Hippodrome.

Re cinema hauntings: I worked in several venues (too numerous to mention especially if I were to include Holiday/‘Day Off’ Managerial Relief Duties). Staff at many of these places claimed them to be haunted and some described in great detail apparitions together with uncanny incidents. Probably the most prolific of all these would be the ABC Darlington which, as a rebuild of the Theatre Royal, I suppose is as likely a candidate as any. I have to say that I never saw any apparitions there (or anywhere else) but I did at times ‘pick up’ on an ‘atmosphere’ which made me feel uneasy.

I am sure there are many former cinema personnel with their own experiences…..