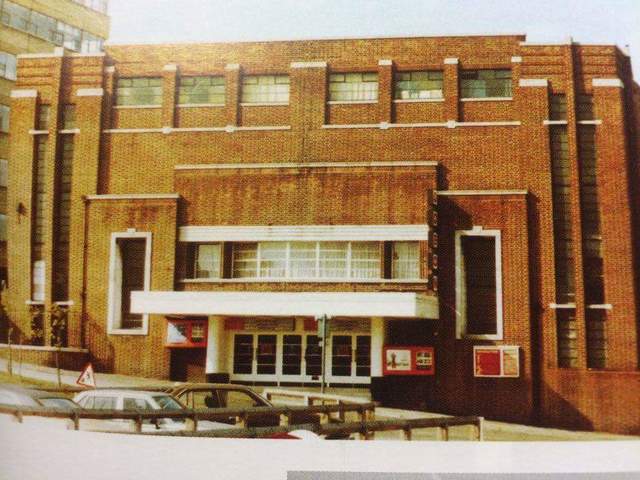 A large free-standing cinema in Tenters Street. Opened on 21st November 1938 as the independent Majestic Cinema, with 1,385 seats in stalls and balcony. It was a very wide cinema, with a proscenium width of 40 feet making it ideally suited to the CinemaScope ratio which was installed in later years. The Majestic Cinema had two ‘sister’ cinemas, one in Darlington which was also designed by architect Joshua Clayton, and the other in Hartlepool, designed by Milburn & Milburn, which were both named Majestic Cinema.

Bought by Oscar Deutsch’s chain of Odeon Theatres on 12th March 1944, The Majestic Cinema was renamed Odeon on 2nd April 1946. Twinned in 1973, by adding a 123 seat mini-auditorium in the rear stalls, under the circle. Plans were to have two mini screens in the rear stalls, but the local Council insisted that there should be a passageway between the two mini auditoria and not just a dividing wall; lack of width precluded this and consequently only the one extra screen was added. The remainder of the rear stalls and all the front stalls was disused. The 600 seat Screen 1 in the former circle continued to be served by the original screen on the original stage.

It was very sad that the Rank Organisation saw fit to close the Odeon on 15th October 1983, as its operating loss was a paltry 10k GB Pounds in 1982; most cinemas made a loss that year and many ran up a deficit much greater than the Odeon, Bishop Auckland.

The truth was that the upstart MD of the company Chrichton Miller did not like Odeon being represented in small market towns like Bishop Auckland and he was determined that it would go, along with many other cinemas which (in time) would have recovered financially, but were not given the opportunity.

Ironically, in the same week that the Odeon closed, a brand new shopping centre and bus concourse opened right next door to the cinema.

The Odeon was derelict and dangerous when demolished in April 1995. A planned nightclub in the building never came to fruition and the replacement building on the site became an Aldi superstore.

Here is an updated link to the 1970’s exterior photograph of the Odeon Bishop Auckland, posted on Sept 14, 2005:
http://www.mawgrim.co.uk/cavalcade/bishauck.jpg

There was a third ‘sister’ Majestic theatre in West Hartlepool (now simply Hartlepool); the Head Office for all three (Bishop Auckland, Darlington and Hartlepool)was in High Row, Darlington.

A preview of a fine watercolour by Bishop Auckland artist, Gaz Miller has been uploaded to the photos section…..

3 photos uploaded including a very rare shot of the auditorium.

Also one taken on the Front of House in the 1960’s:– Manager, Walter Aylen is on the left making a presentation to Assistant Manager, Ken Close as he transferred to another Rank Theatre. Walter was a seasoned Rank Manager who started at the Palace Sunderland (a Gaumont theatre) in the 1930’s. I knew Ken as Manager of the Odeon Halifax when I used to take over as Relief Manager at the ABC in the same town in the mid 1970’s where we had some good times. I heard from Ken recently and he is still alive and well and living in Halifax.

My apologies. I knew of Alan Smith (via Walter Aylen of Bishop Auckland Odeon and Creswell Watson of Shildon Essoldo where he had worked as a projectionist prior to Bishop Auckland).

He did indeed die tragically in Bournemouth (a drowning incident). Apologies to Ken Close also whom I knew very well at Halifax who had worked at Bishop Auckland with Walter Aylen. The two did indeed look very similar!