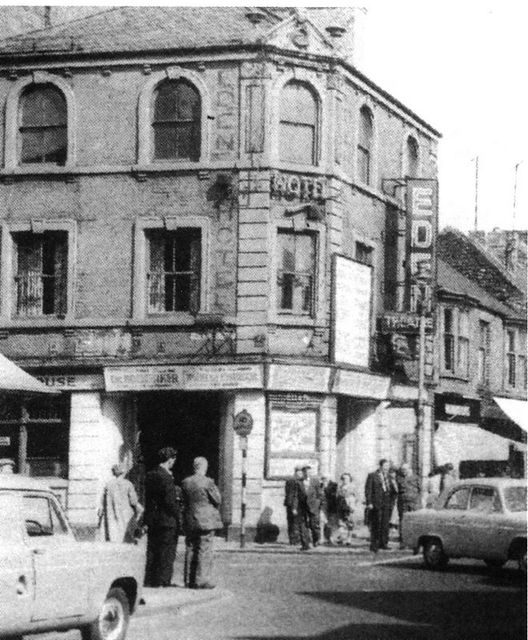 Originally opened in 1865 as the Masonic Music Hall, a melodrama theatre. The original architect is unknown. It underwent alterations by architect W.V. Thompson in 1871, re-opening as a 1,000 seat theatre on 28th August 1871. It was re-named Theatre Royal in 1874.

In 1892, it was leased by Arthur Jefferson (father of comedian Stan Laurel) and he employed noted theatre architect Frank Matcham to make alterations. It re-opened as the Eden Theatre, named after a well known local family, who’s son was to become Prime Minister of Great Britain in 1955-1957, Sir Anthony Eden. The seating capacity was now for 1,550 in stalls, dress circle and balcony. The Theatre Tavern on the corner of the site was incorporated into the building when further alterations were carried out by architect F.H. Liversey in 1901, and it re-opened on 24th December 1902 with a pantomime "Cinderella".

The Eden Theatre was the main theatre in Bishop Auckland for many years, but it did have some use as a cinema. Over the years many famous artistes have appeared at the Eden Theatre, including: Charlie Chaplin. G.H. Elliot and Harry Lauder. It was taken over by the Newcastle based Essoldo group of cinemas in 1947, and they continued to operate the building mainly as a theatre, with some cinema use and for a short while as a bingo club.

The Eden Theatre was closed on 8th July 1961. It re-opened on 14th January 1962 and finally closed on 31st August 1963. It then became a bingo club until 1969. It then remained empty and unused for five years. It was demolished in 1974 for a road widening scheme. Today there is a plaque on a wall commemorating the site of the theatre.

Slideshow devoted to the Eden Theatre from ‘The History of Bishop Auckland’ website (adjust to full screen) :–

Video footage of Stan Laurel’s niece unveiling a statue of the great man at the site of the Eden Theatre:–

3 photos relating to the theatre site uploaded to the relevant section.

The Eden Theatre profile photo appeared in an article about Bishop Auckland in the ‘Northern Echo’ many years ago which placed great emphasis on its “big city feel” on market days namely Thursday and Saturday. The cutting was given to me by my dear deceased friend, Brett Childes, a Rank Manager who, following a period as House Manager at the mighty Odeon Newcastle, became Manager of the Odeons Hartlepool and Sunderland respectively. Following the closure of the latter he became Theatre Manager at the Sunderland Empire.

Re the “big city feel” quoted in the article, this was no exaggeration as thousands of shoppers converged upon the town from all the surrounding small towns and villages. Even when cinema audiences were declining and the town’s cinemas had been relegated to ‘evenings only’ venues they still operated on a ‘continuous from 1 pm’ basis on market days (and school holidays).

Sadly, the town has lost that “feel” now and this is not helped by the opening of an ‘out of town’ development at nearby St Helens Auckland which, as a young boy, I remember for its landmark mammoth gasometers and very little else. It is soon to be enhanced by a multiplex cinema, I believe……

Re the photo, I remarked to Brett about the fact that the Eden was showing films at the time which would place it in the very early 1960’s as ‘The Moonraker’ (George Baker, Sylvia Syms) was originally released in 1958 and ‘Tommy The Toreador’(Tommy Steele, Janet Munro) was the ABC Christmas attraction in 1959.

Brett’s dry response was that “Solly Scheckman must have rung Warner-Pathe and asked them what they had for a ‘fiver’ that week!”

Solly Scheckman was the founder of Essoldo Cinemas and Warner Pathe was the film distribution arm of Associated British Picture Corporation (ABPC) who also operated the Associated British Cinemas chain (ABC) and ABC Television (‘The Avengers’, ‘Redcap’, ‘Mystery and Imagination’ etc). The TV Company merged with Rediffusion to become Thames TV with ABC having a controlling interest.

Posters of the two films showing at the time of the profile photo uploaded to the relevant section.

As the film ‘Stan and Ollie’ is on general release, The Northern Echo has published the following interesting article (with a photo gallery) about Stan Laurel and his Bishop Auckland ties.

Yours truly attended his school, King James I and I well remember the nearby Eden Theatre which had been managed (twice) by Stan’s father:–

A photo of the forlorn looking building prior to demolition in 1974 has been added to the relevant section.