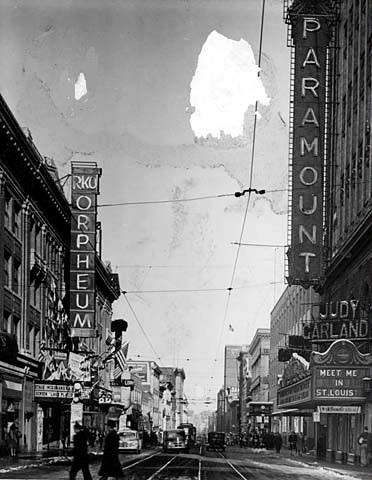 Known as the Capitol Theatre when it opened in 1920, the theatre rivaled anything the Twin Cities had ever seen as far as movie houses go until that time. The theatre seated just over 3,000, and was built in opulent Spanish Baroque style.

Located in the Hamm Building, the Capitol Theatre, built for the Finkelstein & Ruben (F & R) circuit, was a multi-million dollar palace in the true sense of the word. Its lobby area alone contained several kinds of colored marbles, including a ticket booth faced in Italian Travertine (which the grand staircase and walls were also covered with), a Renaissance-era fountain, and its ceiling being covered with a Baroque-style fresco. Smaller lobbies off the main lobby led to mezzanine and balcony levels.

The Capitol Theatre’s auditorium was huge, and contained an orchestra pit with room for a thirty piece orchestra. Its stage was hailed as the largest outside Chicago, measuring 88 by 330 feet with a 77 foot proscenium. Its Wurlitzer 4 Manual organ Opus 1404 with 90 stops took twenty-four men fourteen months to build and two months to install. It cost more than $75,000 and only the Capitol Theatre in New York City at the time could boast a larger theater organ.

In 1929, F & R’s chain was acquired by the Paramount-Publix chain, and the Capitol Theatre became the Paramount Theatre. Briefly closed for minor remodeling, the most noticeable change was reduction in seating to about 2,350.

The Saint Paul Paramount Theatre reopened in late-1929. By the 1950’s, the Paramount Theatre, like many other larger theatres across the country, began to lose customers to the television craze, and by the early-1960’s, it was just another mostly-empty downtown movie house.

Though many fought to keep the grand old theatre intact, so-called progress won out, and the still-elegant Paramount Theatre was completely gutted in the summer of 1965, and a new theatre, the 725 seat Norstar Theatre, was built within its shell.

Opened on November 2, 1966, the Norstar Theatre was equipped for 70mm presentations. It only lasted for a little over a decade before it shared the fate of its predecessor, closing on July 30, 1978.

The architects of the Capitol/Paramount were C.W. & George L. Rapp

I’ve had this book for years now (America Goes to the Movies) and this is one of the saddest pics from it. Photo credit to George Aurelius August 13 1965

I’ll post more from the book, and make sure to give credit where due. Unless I can’t do that, of course…

Compare with the interior photo posted above….

Here is a quote from the “Scope and Content Note” of the finding aid for the papers of the St. Paul architectural firm of Toltz, King & Day, at the University of Minnesota:

“There are plans and photos for the Hamm Building in St. Paul, Minnesota (1919-1920) that include drawings for the Capitol Theatre.”

I’m not sure what this indicates about the involvement of Rapp & Rapp in the design of this theater. It’s pretty clear from the finding aid that Toltz, King & Day designed the Hamm Building itself, but it doesn’t specify what sort of drawings of the theater are in the archive, or who drew them.

If Rapp & Rapp designed the theater and the local firm supervised construction of it as well as of the office building (which would seem a likely arrangement), they would probably have had copies of Rapp & Rapp’s drawings as a guide, and those might be what is in the archive. I wish the finding aid was more specific. None of the content of the collection is available online as far as I’ve been able to discover.

The description of the organ in the header appears to be a compression of two different instruments.

When the Capitol opened, the organ was Kilgen opus 3037, a 4 manual, 31 rank organ which would indeed have been an unusually large theatre organ. Kilgen, better known as a church organ builder, did not have the cache or power of Wurlitzer’s instruments.

When Paramount took over the hall in 1926, they bought a new Wurlitzer organ, opus 1404, a customized 3 manual, 16 ranks organ (possibly 15, there is an ambiguity in the data). As of 2013 the Wurlitzer survives in the Phipps Center for the Performing Arts, Hudson, Wisconsin, slightly altered. Fate of the Kilgen is unknown.