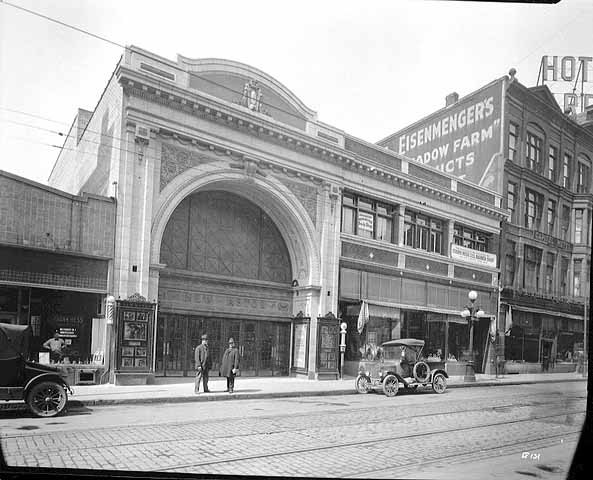 Opened May 15 1920 as the Astor Theatre, by Finkelstein & Ruben, the theatre was said to have cost close to $100,000 to construct. It was designed by architects Buechner & Orth and originally seated 1,100, and presented both live stage shows and motion pictures. It also had its own house orchestra. However, just seven years later, F & R had the theatre shuttered in August 1927.

It was entirely rebuilt, by architect Thomas Farr Ellerbee Snr., and renamed the Riviera Theatre. It was opened November 10, 1928, done in a Moorish-Oriental style, with live palm trees in the lobby, ultra-plush women’s lounges and Middle Eastern decor in the auditorium. The opening movie was “State Street Sadie” starring Conrad Nagel & Myna Loy.

Its vertical marquee, which soared above Wabasha Street N., was the first neon-lit sign in the Northwest.

The Governor of Minnesota as well as over 3,000 visitors attended the opening-night festivities which included fireworks and a parade.

By the end of the 1930’s, the Riviera Theatre had began a program of double features, but by the mid-1940’s, it had returned to first-run films. In 1945, Minnesota Amusement Company, which ran the theatre from the early-1930’s onwards, gave the Riviera Theatre a complete remodeling, which, despite the chain’s best-intentions, removed a great deal of its exotic original decor. The 1928 marquees were taken down and replaced with a far more simpler one.

However, the theatre was showing its age, and as in so many other big-city downtowns, the Riviera Theatre began to play to smaller and smaller audiences. On November 25, 1976, the theatre was closed, despite promises that it would reopen after a remodeling–which never came. Not long afterward, it was torn down.

The original architects were Buechner & Orth

While there was a theater at this address for a decade before the Astor opened, I don’t know if any of the original building was incorporated into the Astor. Records from a 1913 court case reveal that the Gaiety Theatre had 700 seats, so it was only half the size of the Astor.

The contract for remodeling the store building at 447-9 Wabasha Street for the Gaiety Theatre Co. had recently been awarded to Fred Stanley, according to the November 20, 1909, issue of Construction and Contract News. The project involved complete interior remodeling and a new front with a marquee, at a cost of $4,009 and with a target date of December 6 for completion. Plans for the conversion had been drawn by architect A. C. Pear.

A 1919 photo of the New Astor Theatre from the archives of the American Terra Cotta Company can be seen on this web page. The text identifies Buechner & Orth as the architects.