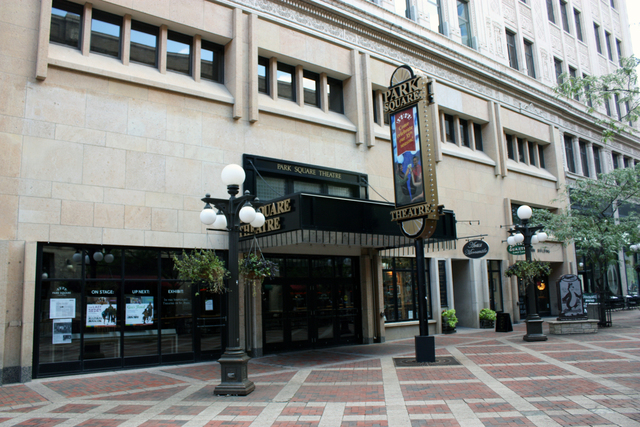 Built within the shell of the old Paramount in downtown Saint Paul in 1966, the Norstar opened that fall, with modern features such as rocking-chair seating, stereophonic sound and wide aisles with plenty of room for patrons to stretch out their legs.

Whereas the Paramount could seat well over 2500, the Norstar sat just over 700. The decor was kept quite basic, and its box office was inside the lobby.

While the theater boomed during its early years, far outgrossing the ticket sales of its predecessor, the Norstar (as well as the rest of St. Paul’s downtown movie houses) began to rapidly decline during the 70s. By 1978, the Norstar was the only movie theater still operation downtown.

The Plitt chain, which operated the Norstar during most of the 70s, decided that the less than twelve year-old house was no longer feasible to keep open, and it was shuttered during the summer of 1978.

For many years now, the former Norstar Theatre has housed the prestigious Park Square Theatre, a legitimate playhouse, with a renovated auditorium, lobbies and other public spaces, as well as the ornate 1920s terra-cotta facade of the Hamm Building (which housed both the former Paramount and Norstar Theatres) having been restored to its original appearance in 2000.

The outer lobby of the Park Square contains a mini museum of photographs of old St. Paul theatres. These are professional shots dating back at least to the 1920s.
They include some excellent shots old Capitol/Paramount which occupied this space from 1921 to 1964. If you are in downtown St. Paul, be sure to take a few minutes to check out this display. It is SUPER!