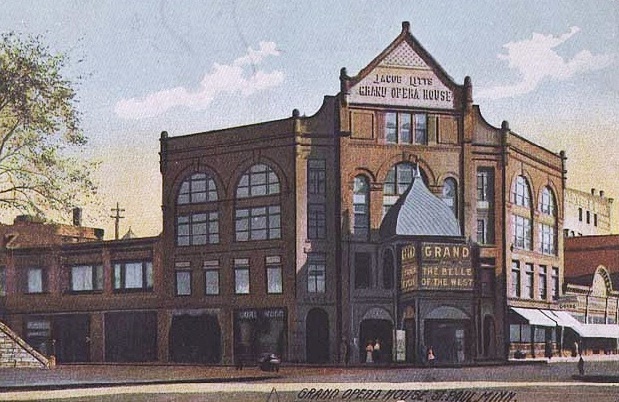 Opened in 1890 by Milwaukee-born Jacob Litt, the Grand Opera House in St. Paul could seat around 1,200 amidst Beaux-Arts finery, including two sets of box seats, a large balcony and moderate-sized stage. Opening day included a speech by the Governor of Minnesota, and attendance by most of the leading families of St. Paul.

Not only did the Opera House stage operatic fare, but musicals and legitimate theatre as well, during the 1890’s and into the first decade of the 20th century. Also, around the same time, oddly enough, the Opera House was the venue for boxing matches, including appearances by such legends as John L. Sullivan and “Gentleman” Jim Corbett.

A blaze in early-1912 destroyed a portion of the Opera House, but it was rebuilt and reopened later that same year, as a burlesque house. Just two years later, it was closed again, and remodeled once more, with interior decor based upon New York City’s Strand Theatre (which is the name that the former Opera House now went by as well). It housed a $5000 pipe organ, had its own house orchestra, as well as a colossal electrically illuminated roof-top sign. The Strand Theatre became primarily a movie house, though it still continued to host live entertainment as well.

Very soon after, it received a final name change, as the Garrick Theatre and by 1926 was operated by the Finkelstein & Ruben chain. From the 1920’s into the 1940’s, it was a first-run film house, and in its early years screening movies, the Garrick Theatre even had reserved seating and higher prices for box seats.

However, by the end of World War II, the Garrick Theatre had definitely seen better days, and was showing B-grade double-and-triple features. Shortly after it closed in early-1950, it was razed to make way for a parking garage.

This is a photo of the Dyckman Hotel, also on Sixth Street. I believe that there was a theater on the ground floor, but I won’t add it unless someone can corroborate. Also if it’s listed under another name, let me know:
http://tinyurl.com/qv7f4

The February, 1890 issue of construction trade journal Stone said that the $80,000 theater being built at St. Paul for Jacob Litt had been designed by Oscar Cobb.