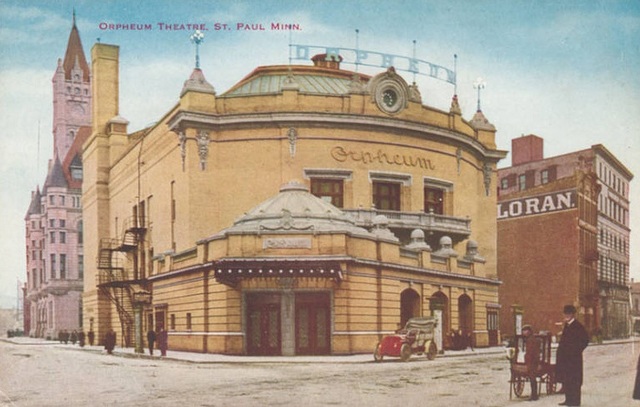 The first Saint Paul Orpheum Theatre opened its doors in late 1906, with a standing-room only crowd packing the over 1500 seat house, and nearly as many having to be turned away. Even the Governor of Minnesota was on hand with other state and city officials to enjoy the first night’s vaudeville extravaganza.

However, the interior was highly ornate, and was no less stunning than the Minneapolis Orpheum in its design.

While movies were shown at the Saint Paul Orpheum as early as 1910 (including a very early Thomas Edison-created attempt at sound movies, in 1913ï¿½which proved to be very unpopular with audiences), it would be another two decades before movies would come to the theater on a permanent basis.

In 1925, the old Orpheum closed when the Orpheum circuit moved into the twice as large and much more luxurious Palace (which was renamed the Palace-Orpheum, and later, simply the Orpheum). A year later, the old Orpheum was reopened as the President, a legitimate playhouse.

After just a little more than three years, the President closed once more, and in 1930, was acquired by RKO as a movie house. By the mid-30s, the President was now a second-run theater.

In 1938, the President was closed, this time for good, and was demolished later that same year to make way for a parking lot.