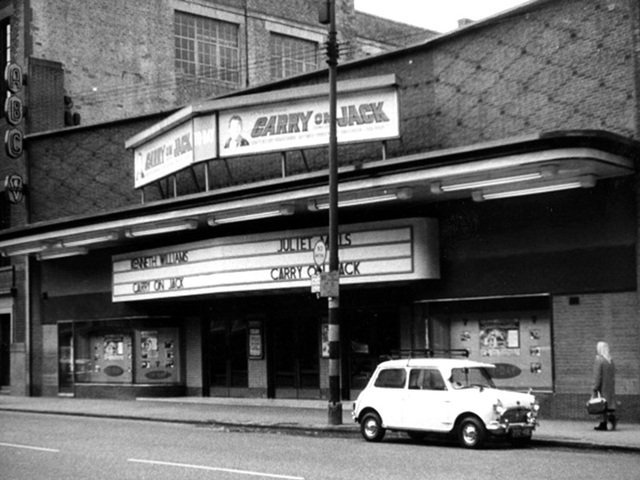 Located just south of St Georges Cross in the Woodlands district, on the northern edge of Glasgow city centre. Originally, this was the Norwood Ballroom and it was radically rebuilt in 1936 by cinema owner Albert Ernest Pickard.

Opened as the Norwood Cinema in June 1936, it was designed by the architectural firm Laird & Napier. It was unique on three counts;

The rather low exterior had a replica model of two cantelever spans of the Forth Railway Bridge across the top, which initially had model trains passing across from side to side! Inside the stadium style auditorium (with no balcony, but a raised section at the rear) the decoration of the side walls was entirely clad in glass with faceted mirrors, which caused spectacular reflections! The ceiling was covered with a special tapestry, woven by Templeton’s carpets, which was glued to the ceiling!

The Norwood Cinema was sold to independent operator George Palmer in 1945 and it was re-named George Cinema. The mirrored interior was removed, but the Forth Bridge replica remained on the front of the building.

In 1955, it was purchased by Associated British Cinemas(ABC). Sadly, they removed the Forth Bridge replica, and remodeled the facade. It was re-named ABC from 4th May 1958. ABC closed the cinema on 20th September 1975. It was taken over by an independent operator and was re-named Dreamland Cinema, screening Asian/East Indian films. Closed in 1981, it was converted into a snooker club, now named the Q-Snooker Club.

The name was changed from Norwood to Chrystal Palace at some point during the ‘30s or '40s presumably on account of the mirrors. It is listed under this name in the 1945 Kine Year Book.