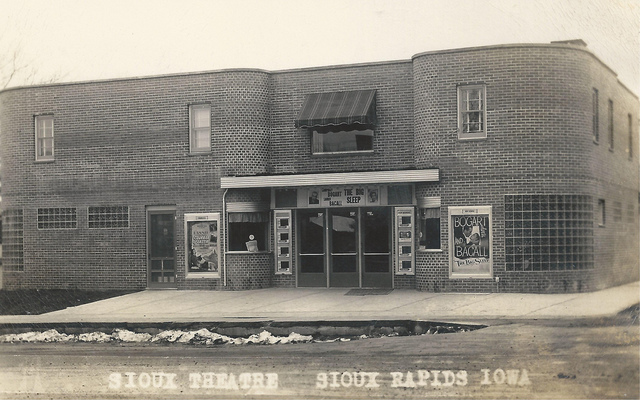 The Sioux Theatre opened in September 1946. The theater’s original owners were Don and Edna Gram. The theater was still in operation by 1974, when its then-owner and manager, Michael Berger, had two Strong Lume-X projectors installed at the Sioux in March of that year.

The original owners name was Gran. It was later operated by one of their relatives, Albert and Doris. When originally built it had a 4 bedroom appartment above the lobby. It featured a sound proofed CRYROOM where parents could take babies and not have to annoy other patrons. It also housed an ice cream parlor next to the lobby (this was later removed and replaced by a dentist office). I purchased it from them in Novemeber of 1973, at that time it had been closed nearly 3 years. I reopen it on November 29. 1973 with United Artist “Tom Sawyer”. The Lumex’s were installed on March 11, 1974 (my 23rd birthday, yah a $12,000 birthday present along with custom built automation). The theater ran a 3 day 2 changes Thur-Sat & Sun-Tues policy. I closed the theater in March of 1976 as a result of the reconstruction of US 71 which issolated the town from the rest of the world. In 1985 I deed the property to the Sioux Rapids Historical Association and they now use it for housing their museum, along with using the seating and stage for school plays and other local live theater.