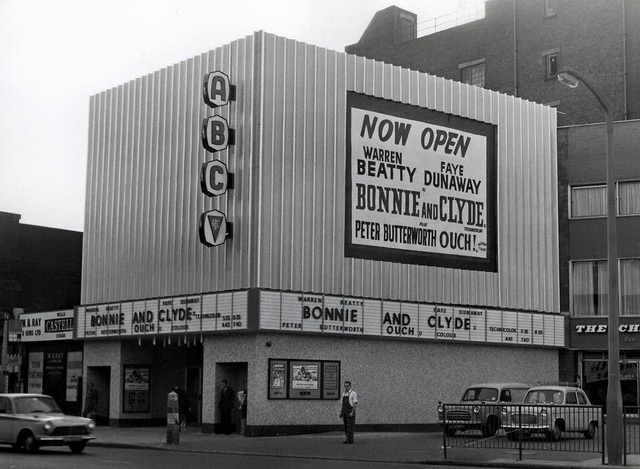 Located to the south of the River Thames in the Borough of Southwark, in the district of Newington, the area is known as Elephant & Castle. Originally on this site was the Theatre Royal/Elephant and Castle Theatre. Built in 1872 to the plans of architects Messrs Dean & Son and Matthews, it was destroyed by fire in March 1878.

A new Elephant and Castle Theatre was built, designed by architect Frank Matcham, it was the first assignment for this prolific theatre architect. It opened on 31st May 1879 and had a seating capacity of 2,203 in orchestra stalls, dress circle & gallery levels. It underwent some reconstruction in 1882, and on 18th September 1896 George Arlis made his first public appearance as the goaler in the play “Vidocq”. Further reconstruction was carried out again in 1902. Live theatre use ceased in 1928.

After a couple of years standing unused, it was taken over by Associated British Cinemas(ABC). They employed their ‘in house’ architect William Riddle Glen to redesign the interior in an Art Deco style and it re-opened on 22nd December 1932 with 2,315 seats in stalls and circle levels. The Elephant & Castle Theatre was equipped with a Christie 3Manual/11Rank organ, that had an illuminated console, which was the first illuminated console to be built by Christie. The stage and dressing rooms were retained and occasional variety shows were held here. The large projection box was located on the underside of the front of the circle, which gave an almost straight throw onto the screen. The Elephant & Castle Theatre was closed for a month in May/June 1941 when it suffered from German bomb damage, which destroyed buildings to the right of the cinema.

It was re-named ABC and was modernised in October 1967, when the façade was covered over in blue metal sheeting, to give the building a more ‘modern’ look. Only the stalls seating area was in use and it was refurbished into a ‘Luxury Lounge’ cinema which opened on 9th October 1967 with Warren Beatty and Faye Dunaway in “Bonnie and Clyde” and Peter Butterworth in “Ouch”. In January 1981, the ABC was closed to be converted into a triple screen cinema, which re-opened on 7th May 1981 with 546 seats in the former circle screen, and two screens in the former rear stalls area that seated 271 and 211.

It was taken over by the Cannon Group in 1986, and they quickly disposed of the building to the independent Panton Films chain on 8th June 1986 and it was re-named Coronet Cinema. It was closed on 23rd September 1999 with Tom Cruise in “Eyes Wide Shut”, “The 13th Warrior” and “Never Been Kissed”.

After laying unused for almost four years, the Coronet Cinema was de-tripled and the stalls floor was emptied of seating to allow a standing audience to attend concerts and use the building as a nightclub, now re-named Coronet Theatre. It re-opened after a 2 million GB Pounds renovation on 19th April 2003. Standing room now accommodates 1,600, with seating provided in the circle for 560.

A new 42 foot screen was installed, with Dolby digital sound and with the circle seating area being used, the Brazilian film “City of God” began cinema use again from 7th November 2003. This was followed on 17th December 2003 with “Lord of the Rings”. Concerts and nightclub use were more common than film presentations.

It was announced in November 2016 that the lease on the theatre had been extended for a year. A stage show “The Melodramatic Elephant in the Haunted Castle” was presented for one night only on 8th November 2017. Sold Out weeks in advance, the play told the story of entertainment on the site. The Coronet Theatre closed with an all night party on 31st December 2017/1st January 2018. The building stood vacant & boarded up until 18th December 2020 when demolition began. Demolition was continuing in April 2021. The site will be redeveloped into a new shopping centre replacing the existing adjacent Elephant & Castle Shopping Centre.

A set of vintage photographs of the ABC/Coronet Cinema:
View link

Have loaded picture from the ABC Refurm..

The Coronet is now threatened with development, despite operating successfully. The adjacent Shopping Centre is likely to be rebuilt and wants to include the theatre site in the redevelopment. Photos from July 2013 here:–

The Coronet is closing.
Article below.

And two years on, it now seems like the Coronet will close down on 1 January 2018, with demolition to being in 2019. https://www.southwarknews.co.uk/news/coronet-go-bang-new-years-eve-despite-redevelopment-delayed-2019/