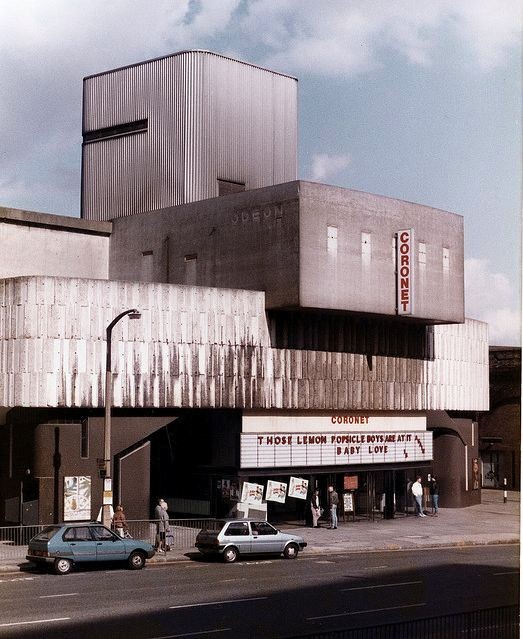 Located in the southeast London inner city district of Elephant & Castle. The Odeon Elephant & Castle, London was a superb example of brutalist concrete design, and the neglect of English Heritage to list and protect the building in the mid-1980’s ought to make them hang their heads in shame. Designed by Erno Goldfinger, the Odeon was a replacement for the magnificent Trocadero Cinema that had been forced to close for a new road scheme. It occupied only a part of the site of that 3,500 seat former Gaumont operated theatre. On the remainder of the former Trocadero Cinema site was built Alexander Fleming House office block, again designed by Erno Goldfinger, which was converted in 1998 into apartments known as Metro Central Heights (now a Grade II Listed building).

The Odeon opened on 22nd December 1966 with 1,055 seats on a stadium plan. The opening film was Cliff Richard in “Finders Keepers”. The projection suite was partly overhanging the rear stalls and partly cantilevered out over the street. The foyer was beneath the raised rear of the auditorium and entry to the cinema was via a central vomitory. There was no proscenium, the famous “floating” screen had no masking at the top or bottom but had two black panels which rotated around from the back of the CinemaScope screen to mask the sides for standard ratio.

Decoration was sparse but the cinema was perfect for its purpose and, it has to said, its rather rough South East London location.

Panton Films took the cinema over in November 1981, re-naming it the Coronet Cinema and they continued to run it until it was closed on 28 July 1988. It was demolished the following month to provide a car park! The Coronet Cinema name was transferred to the former ABC Elephant & Castle, located directly across the road from the former Odeon.

After many years as a car park, an annex residential block to Metro Central Heights was built on the site in 2008.

A set of vintage photographs of the Odeon/Coronet, Elephant & Castle:
View link