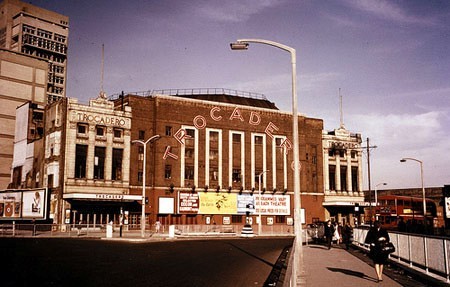 Located in the southeast London inner city district of Elephant & Castle. The Trocadero Cinema was a colossal 3,500-seat cinema, built for Hyams and Gale (H&G Kinemas) and opened on 22nd December 1930 with Jane Baxter in “Bed and Breakfast” and Lupe Velez in “The Storm”. The opening night was almost a disaster, as the crowd assembled outside the building, London was experiencing a dense black London ‘pea-super’ fog. As the 3,500 capacity audience entered via the the theatres' two entrances, in rolled the fog, filling the auditorium, which made seeing the screen virtually impossible except for those sitting in the front rows of the stalls. Even the operator in the projection box had difficulties and was supplied with field glasses! Towards the end of the evening the fog cleared.

The Trocadero Cinema was one of the finest movie palaces ever built in the United Kingdom, and certainly proved that architect George Coles was a match for American theatre architects such as Thomas Lamb or Rapp & Rapp. Due to the awkward site, there was little room for foyer space and the auditorium was set at a 45 degree angle to the main façade.

The auditorium was designed in a magnificent ornate French Renaissance style, with colours of soft chocolate and old rose, with features being emphasised in gilt. The side walls had a series of draped alcoves which were curved inwards to meet the ceiling and interspersed with Roman eagles displaying outstretched wings. The ceiling had a large circular dome, illuminated in dark turquoise and surrounded by a ring of large octagonal medallions. Seating was provided on stalls and circle levels. There was a large fully equipped stage, with dressing rooms and the cinema was equipped with a Wurlitzer 4Manual/21Rank organ which was opened by Quentin Maclean. The Trocadero Cinema is referred to in Denis Sharp’s ‘The Movie Palace’ book as ‘truly elephantine’.

It was taken over by Gaumont Super Cinemas from October 1935, and it was affectionately known to locals as ‘The Troc’. During World War II in the middle of the Blitz, the Trocadero was closed in mid-October 1940, re-opening on 2nd November 1940, but initially, only for weekend performances. It was closed on 10th May 1941 for several weeks, due to bomb damage.

The Trocadero Cinema was closed by the Rank Organisation on 19th October 1963 with George Moon in “Breath of Life” and Laurence Harvey in “The Running Man”. The Wurlitzer organ was removed from the building and later installed in the Edric Hall of nearby Southbank University.

The Trocadero Cinema was soon demolished and an office block (Alexander Fleming House) and a new 1,040 seat Odeon cinema, both designed by noted architect Erno Goldfinger, were built on the site. The Odeon Elephant & Castle, which was in a stark modern design, in concrete, opened on 22nd December 1966 (it has its own page on Cinema Treasures). It closed as the Coronet on 28th July 1988. It was demolished in August 1988 and the site remained vacant until 2008 when a residential block annex to Metro Central Heights was built. Erno Goldfinger’s Alexander Fleming House having been converted into residential use in 1998, and re-named Metro Central Heights, is now a designated a Grade II listed building.

On 4th June 2008, a commemorative plaque, donated by the Cinema Theatre Association, was unveiled by Radio & TV celebrity Denis Norden, who began his cinema career as assistant manager at the Trocadero Cinema during World War II. The plaque is located on the outside wall of current building and has photographs and a history of the Trocadero Cinema.

In 2010, work began installing the Trocadero Wurlitzer organ into the Troxy Cinema, Stepney in east London, a ‘sister cinema to the Trocadero Cinema. It had its inaugural concert in its new home at the Troxy on 22nd August 2015.

The Trocadero Cinema, like the 4004 seat Gaumont State Theatre, Kilburn, London were projects of the Hyams and Gale circuit which were taken over by Gaumont British Cinemas.

The Trocadero was taken over in October 1935 by Gaumont Super Cinemas. The seating capacity of the Trocadero was 3,500 and it was one of the most lavish ‘movie palaces’ ever built in the UK and was on the same scale as a Thomas Lamb, or Rapp & Rapp theatre in the USA.

Whilst looking for other material on the newly-updated RIBA website recently, I hope I’ve discovered the epitome of the CinemaTreasures theme of capturing the juxtaposition of the modern and the glorious:

Photograph taken in most likely the very last few months of operation:–

If my memory is correct .. The Comedy Writer “Dennis Norden” was in Cinema management here…