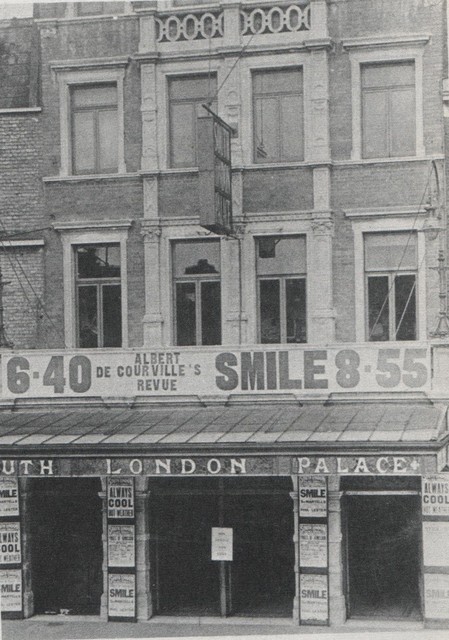 Located in the Southwark/Elephant and Castle district of Lambeth, just to the south of the River Thames. The first building on the site was the South London Music Hall which opened in 1860, with a capacity of 1,200. It was destroyed by a fire on 28th March 1869.

A new theatre was built, opening on 19th December 1869. Designed by architect William Paice, it had seating provided for 287 in the pit, 386 in the stalls, 240 in the balcony and 390 in the gallery. In 1893, renovations were carried out by the architectural firm Wylson & Long.

Always independently operated, it was taken over by the Variety Theatres Consolidated Ltd. chain in 1925. It had been equipped to show films as part of the variety programme and by 1937, was operating mainly as a variety theatre, but still with occasional weeks of cinema use.

The South London Palace was closed in 1941, when it received damage from German bombs. It never re-opened and the remains of the theatre were demolished in January 1955. The London South Bank University now stands on the site.

I love the line at the bottom of p.2 of the programme from 1937 included on that page: “In the interests of Public Health, this Theatre is disinfected throughout with Jeyes' Fluid.” It must be pretty powerful and/or pungent stuff because, although it is still manufactured today, it is only for outdoor use.