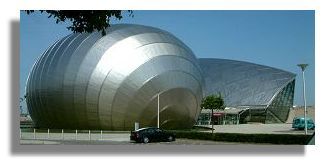 Housed in a modern ‘futuristic’ space-age style building which was designed by BDP Architects (Building Design Partnerships). The building, which is constructed out of titanium, opened in 1999. It is the first IMAX theatre to operate in Scotland, and has the biggest screen in Scotland.

It is now operated by Cineworld Cinemas.