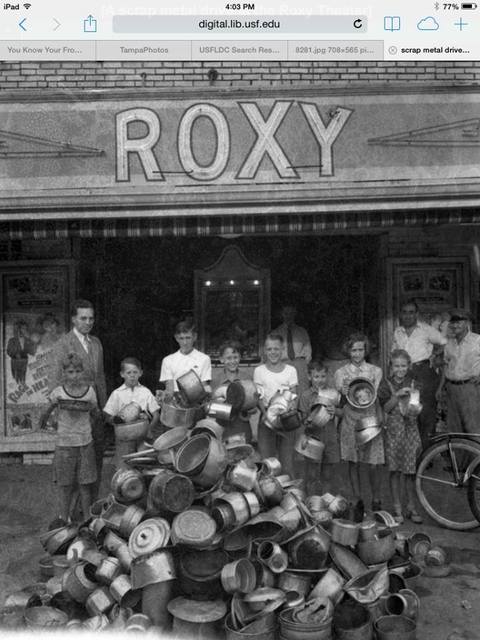 The Roxy Theater opened January 16 1936. On August 8, 1971 it was renamed Northside Adult Theatre. The building is currently occupied by a used furniture store.

Hate to be the bearer of disappointing news but the blue building above is not the Roxy Theatre. The Roxy was right next door to this building on the left side. It was demolished years ago and the property today remains an empty lot. If you look closely at the photo you can see a very narrow portion of the empty lot on the left. That’s where the Roxy stood. It was known as the Northside Adult Theatre for a few years before closing. I remember seeing an adult film here around 1971. Look at the old b/w photo of the Roxy Theatre posted above and you’ll see a portion of the Southern Used Furniture building on the right.

Nick, you don’t miss a beat.

Notice the very top of the Roxy facade in the old b/w photo. At each end of the facade is a small slightly raised brick decorative feature. The facade on the blue building doesn’t have these.

Here’s some additional information from a former operator who worked here. The Roxy was owned and operated by Florida State Theatres for many years. Around 1945 Florida State Theatres built the Springs Theatre which was just a block down from the Roxy. When they opened the Springs they closed the Roxy. Not long afterwards a company called State Theatres took over the building and reopened the Roxy. State Theatres also operated the State Theatre downtown, the Palma Ceia in south Tampa, and the Northtown in north Tampa. The Roxy remained open for a few years under State Theatres. When it closed the floor was leveled and it became McCormick’s Department Store for several years. When McCormick’s finally closed the building was later taken over by a private individual and reopened as a theatre once again..as the Northside Adult Theatre. “Deep Throat”
had its first Tampa showing here. I remember the Northside being open for several years probably
at least through a good portion of the 1970s. When it finally closed the building was torn down.
The empty lot is still there.

Is Charlie your source?

Yes, none other. Charlie & his wife provided me with the info above. To be honest I was a little skeptical about the Roxy being a Florida State Theatre. Theatres under this chain have always been considered the city’s deluxe houses…the cream of the crop. And I couldn’t see the Roxy being a deluxe theatre. But sure enough in looking through the ads, the Roxy was listed under Florida State Theatre’s banner. Evidently there were several owners through the years including the two mentioned in an ealier post…Claughton Theatres and Maurice Stahl.

Thanks Nick.Sorry it took so long to read this.

This reopened as the Northside Adult theatre on August 8th, 1971. Grand opening ad in the photo section.