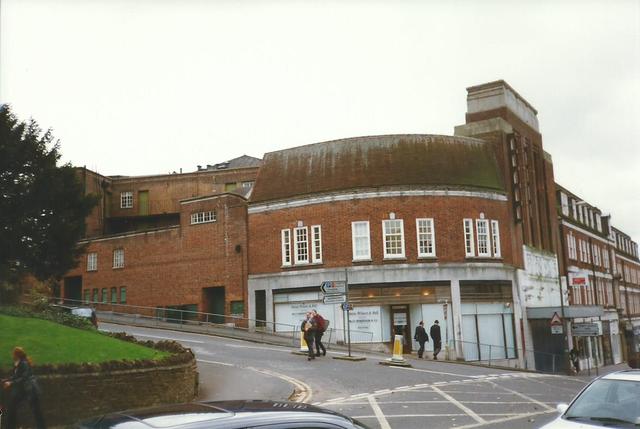 The Odeon was located on the Upper High Street on the corner of Epsom Road and Jenner Road. The plot of land was owned by the Prudential Insurance Company, and they incorporated offices and shops into the building which contained the cinema, operated by Oscar Deutsch’s Odeon Theatres Ltd. chain.

The Odeon opened on 13th May 1935 with Jack Buchanan in "Brewster’s Millions". The cinema is not typical of the Odeon Theatres chain, although it was designed by architect Andrew Mather, who designed many Odeon’s, it was co-designed by architect J. Raworth Hill. It could be that the building was a take-over of an existing scheme, prior to its completion.

The exterior had a tall brick facade, with three tall windows that had ornamental iron grill work. There were four small sculptured white stone, bas-relief panels immediatley above the canopy, which had couples involved in kissing, dancing etc. The name ‘Odeon’ was in letters mounted on the white stone across the top of the facade. Due to local council regulations, there was no neon lighting allowed on the building.

Inside the auditorium, seating was provided for 1,145 in the stalls and 478 in the circle. The rounded corners of the proscenium were unusual for an Odeon, as were the rounded alcoves on each side wall.

The Odeon was tripled in August 1973, with screen 1 in the former circle seating 452, and two 121 seat screens located under the circle in the rear stalls. In February 1989, a fourth screen seating 320 was added in the former front stalls area.

The Odeon was closed on 8th December 1996, when the new 8-screen Odeon multiplex opened in the town. The original Odeon was demolished in late-2002, and a block of shops and flats named Trinity Gate was built on the site.

I was a student in Guildford between 1970 and 1974, during which time I saw several films at the Odeon, including Woodstock and Fantasia on the big screen – pre tripling. Guildford was also the home of Studio 1, which became one of the first cinemas in the country to be twinned into Studios 1 & 2. These were closer to the Uni – as well as round the corner from the best Indian restaurant in town, so were the cinema of choice for students. The present multiplex is just round the corner from where the studios used to stand.