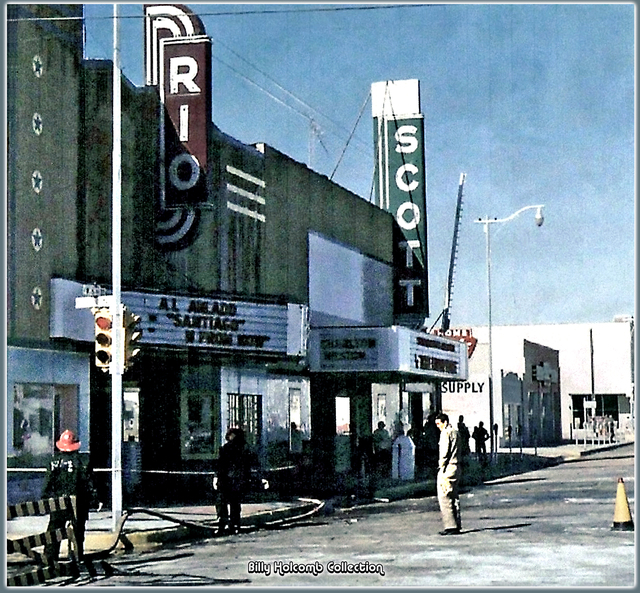 Listed as operating in 1950, this was the second of three individual Rio theaters to have been built in Odessa. It was located next door to the Scott Theater.

Around 1957 it was destroyed by a fire thought to be arson committed by a disgruntled employee although this was never proven.

A three-alarm fire roared through the Rio Theater here in pre-dawn hours Thursday, completely gutting the 900-seat movie house and causing damage estimated from $75,000 to as high as $200,000. Two firemen were taken to Medical Center Hospital suffering from exposure, but were released shortly afterward and sent home.

The fire apparently broke out about 1 a.m., firemen said. Firemen fought the roaring blaze until about 4:30 a.m. Cause of the fire was not immediately determined. Several firemen miraculously escaped injury in a backdraft explosion which blew out the southwest upper wall. Falling timbers twice almost trapped firemen in the roaring inferno.

A passing cab driver, unidentified, reported the blaze at 1:25 a.m. After seeing the blaze, then confined within the building, he radioed his dispatcher, who alerted firemen. Firemen quickly pulled two additional alarms, the second coming at 1:30 and the third at 1:35 a.m.

The fire completely gutted the building leaving only the brick walls and a small portion of the roof remaining. Streams of water poured onto the fire quickly turned into icicles and sheets of ice in the 14-degree weather.

Wallace Scott, a co-owner of the Rio and the adjoining Scott Theater, which was damaged slightly by smoke, estimated damage â€œat about $125,000 to the equipment and the building.â€ Plans for remodeling the Rio were announced immediately after the fire on Thursday.

I thought this site was anyone to contribute what they have to say:
Remember, everyone has memories about the movie days.
In fact, if anyone wants to know everything documented about theaters
of Odessa.
They can read all about them in booklet-MOVIE ROW-by Billy Holcomb
It tells everything you might want to know.
It is available at the Southwest Archives at Ector County library
It has not been published as yet, but all info is there.
Just my comment…

The theater is once again up for sale. Anyone interested in it should contact Bruce Beaird @ 432-238-5087 or email at

This opened on January 10th, 1942. Grand opening ad in the photo section and below