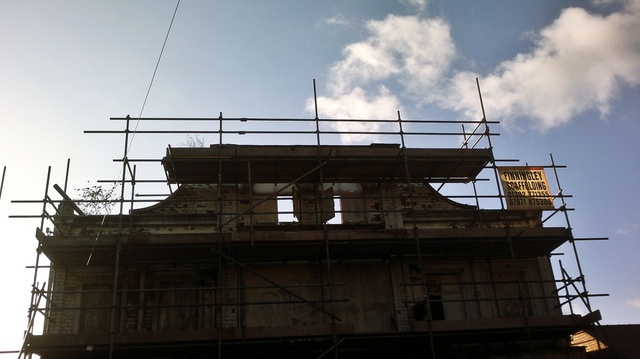 Located in Thorne, a small town to the north-east of Doncaster, South Yorkshire. The Kensington Palace Cinema was opened on 4th April 1927 with seating provided for 1,000 in stalls and circle levels. It had a 20 feet wide proscenium and the cinema had a cafe.

Taken over by Star Cinemas of Leeds in 1967 and re-named Ritz Cinema, it was closed shortly afterwards in September 1967 and became a Star Bingo Club. Its last use was as a nightclub named ‘Merlin’s’, which had closed by 1998. Since then the building was unused and empty, and became increasingly derelict.

Sadly, in 2011 most of the auditorium was demolished, leaving just the facade and foyer area standing. In 2012, the building was being converted into residential use, and the work was being filmed for the Channel 4 reality TV show ‘Grand Designs’, transmitted on 4th September 2013.

That looks like a set for a very sad movie!

The Kensington opened on Monday 4th April 1927 with seating for 1000. In 1967 Star Cinemas converted the cinema into a luxury entertainments centre for films, bingo and social centre. It reopened as the Ritz with ‘My Fair Lady’ but as Ken says, by September the last film was shown. I believe the bingo carried on for a while longer.

This is even BEYOND being sad. How can local authorities allow this kind of dereliction without intervening? There should be laws in place enabling councils to slap heavy fines on owners who allow their property to get into this sort of state.

Hi, we’re making the cinema into a family home. check our progress at www.gwynap.com/kensington

Hi Gwyn, you and your wife did such a wonderful job to this building, I saw it on grand designs :) nice family!!! all the best!!!

The episode of Grand designs showed one(maybe 2?) old black and white photos of the Kensington Cinema!