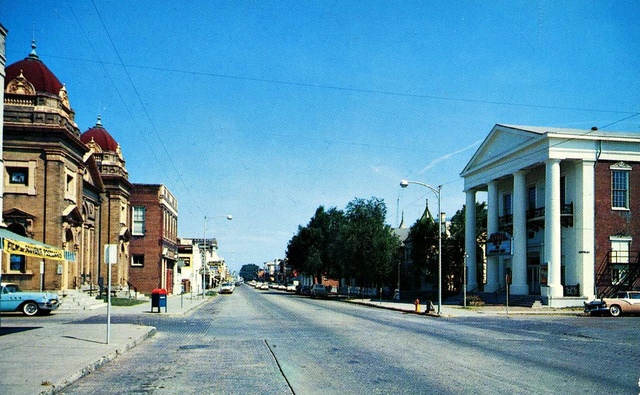 The Thespian Hall was built in 1855-7 for use by the Thespian Society, which contained reading rooms, a library and a theater. The second floor was used as a City Hall and also by the Masonic Order.

It was a Greek Revival-style edifice with four towering columns supporting a pediment.

When it opened on July 4, 1857, a ball was held there to celebrate its opening.

A few years later, during the Civil War, Thespian Hall served as a hospital and later, barracks.

In 1869, a German-American music society, the Turn and Gesang Verein, leased the theater portion of the hall, while an armory was set up in the basement (towards the end of the 19th century, the basement was converted into a roller skating rink).

In 1901, Lon V. Stephens rescued the Thespian Hall from demolition, and hired St Louis architect J.L Howard to remodel it into the Stephens Opera House. It would then serve for over a decade as one of the main venues for touring stage shows in the state after St. Louis and Kansas City.

In 1912, it was again transformed, this time into a movie theater, the Lyric, which it would remain for another six decades, closing in 1975.

When the Lyric was once more was faced with the threat of being demolished, in 1937, the Friends of Historic Boonville was formed to prevent the loss of the great old theater, one of the earliest preservation groups founded in the Midwest, and the first in Missouri.

Aided financially by the Kemper Foundations, the group took over the theater in 1975, and began the long task of restoring it to its original appearance.

In 1969, the building was added to the National Register of Historic Places.

Today, Thespian Hall Theatre is used for performing arts, concerts as well as community functions. It is the home of the Boonville Community Theater and the annual Missouri River Festival of the Arts.

For some reason, both the 1910 and 1917 Sanborn maps spell the name as Stevens, which is wrong. It is however, interesting to note that it was not called the Lyric on the 1917 map. The second floor was used as a lodge hall. Lon Vest Stephens was governor of Missouri 1897-1901, and his brother W. Speed Stephens assisted in the operation of the theater. In late 2018, the stage had to be closed because the rigging ropes were too worn to be used safely. Hopefully it has reopened.