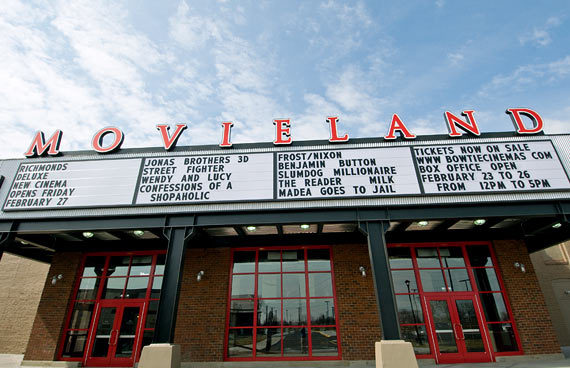 Movieland at Boulevard Square opened in February of 2009. Decorations inside Movieland were by designer Michael Mahaffey.

Bow Tie Cinemas (formerly B.S. Moss Enterprises) opened its 18th location to the public on February 27th, 2009. The previous evening, a local charity premiere of “Sunshine Cleaning” was held, and screenwriter Megan Holley introduced the film and held a Q&A session.
The theater was retrofitted into a restored former locomotive assembly plant which was built in the 1880’s. Highlights include restored exposed brick walls, restored ceiling and light monitor in the lobby, and railroad themed decor throughout. On the exterior several artifacts unearthed during site work were preserved, including original rails that locomotives were rolled out on once completed. Also on the property is a former brass foundry building built around the same time that manufactured fittings for the trains.
There are 17 stadium-seated screens with Dolby Digital surround sound in every house, and two feature Christie DLP projection with 3-D capability.
The concession features a selection of hot foods, and there is a wine and beer cafe in the lobby.
Bow Tie also brought its trademarked “Movies & Mimosas” classic film series and “Insomnia Theater” cult classic series to the theater, and “The Rocky Horror Picture Show” with live cast is featured on alternate weekends.
There are just under 3000 seats, and the architect was Jonathan Taylor of Commonwealth Architects. Decorator was Michael Mahaffey, who also designed Bow Tie’s Criterion Cinemas at Blue Back Square in West Hartford, CT.

The opening of this theater was much celebrated, as Richmond had no first-run movie theater in the city limits for many years.

It’s debated as to when the last time it was that such a theater existed. Cloverleaf was technically just a few feet over the line in Chesterfield County, and Willow Lawn was the same for Henrico. In any case both theaters had closed by 2001. The Byrd is located in the heart of the city’s cultural district and never closed from 1928 until it briefly shut down during the Covid pandemic, but it has only shown second-run and festival product since the early 80s.

I believe the actual answer to “what was the last movie theater that unambiguously showed first-run, mainstream films in Richmond before Movieland opened?” was the Westover, which closed in 1995, and the last one north of the river was the Grace Street prior to its conversion to a porno/arthouse venue in 1987.

The venue is very unique and is set in a booming yuppie district, within walking distance of several trendy restaurants and right next door to the baseball stadium. On summer nights you can see the fireworks being set off from the stadium as you are walking back to your car in the theater parking lot (and you can also hear them during quiet parts of movies!) The major drawback of this venue is that the smaller houses have VERY tiny screens, the worst being auditorium #10 which is actually tucked behind the concession stand and measures 20 feet across at best.