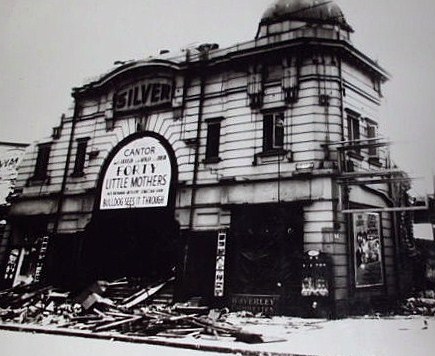 Located in the west London inner city district of Shepherd’s Bush, to the west of the railway bridge on the south side of Uxbridge Road, opposite the Hammersmith & City Line tube(Underground) station. The Silver Cinematograph Theatre was built in 1914 on the site of the Albion Brewery. It opened in either August or October 1914 (sources vary). The Silver Cinematograph Theatre had an attractive stone facade, with a central entrance and the name ‘Silver’ across the middle over the entrance. There was a small copula tower on the right of the building. It was equipped with a Nicholson & Lord straight pipe organ.

By 1937, it had been re-named Silver Cinema. It received severe damage by German bombs in September 1940. The final films displayed on the cinema were Eddie Cantor in "Forty Little Mothers" and Jack Buchanan in "Bulldog Sees it Through". It never reopened and the remains were later demolished. For many years now, the site has been re-developed as an extension of Shepherd’s Bush Market.