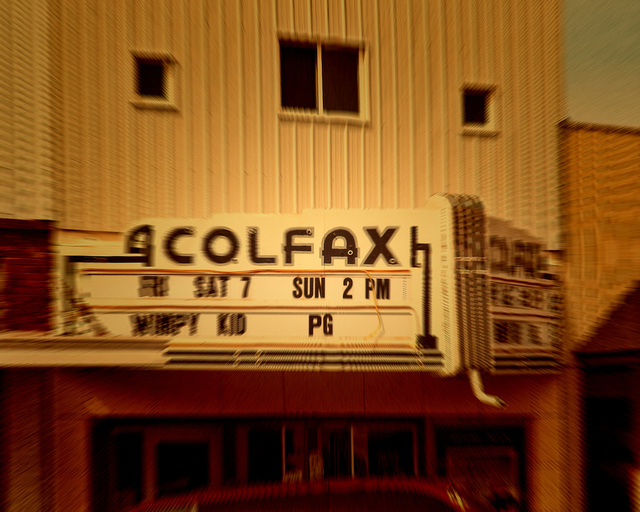 Located on E. 11th Street at B Street. The Favorite Theatre was opened around 1912. Around 1929 it was equipped for sound and renamed Strand Theatre. In 1940 it was renamed Colfax Theatre.

The theatre was closed for some time and was reopened in 2006. The theatre shows first run movies on Friday, Saturday & Sunday and is operated almost entirely with volunteer help.

The September 11, 1937, issue of Boxoffice said that Joe Swoboda’s Avalon Theatre Corp.,operators of the Avalon and Strand theaters in Schuyler, had taken over another Strand Theatre at Pierce, Nebraska.

An E.G. Gannon took over the Avalon Theatre in 1945, and apparently operated it until he built the Sky Theatre in 1948 or 1949. Carl Mansfield was still operating the Colfax into the late 1950s, per various issues of Boxoffice.

A correction to my previous comment: The February 14, 1954, issue of Boxoffice said that Reggie Gannon, son of the late E.G. Gannon, had bought the Colfax Theatre with the intention of closing it. The Colfax is only mentioned retrospectively in Boxoffice after that. Reggie Gannon continued to operate the Sky Theatre until 1962, when he moved to Arizona.

Looks like it opened as the Favorite Theatre around 1912, transitioned to sound as the Strand which closed with “Gone With the Wind” on April 27, 1940 to undergo a refresh. All seats were sold and it became the Colfax Theatre under new operator, Harold Bowers on October 24, 1940 with “My Love Came Back.”