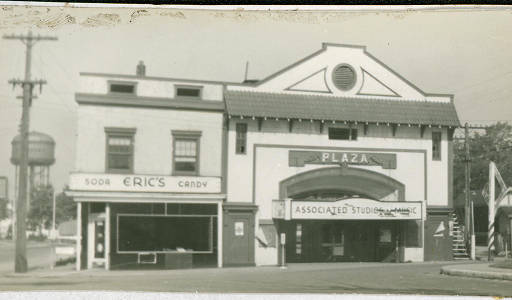 Located in Freeport, Long Island, the Plaza Theatre was opened in 1912. It was a wood frame building, and its address given at that time was at Grove Street and Olive Boulevard.

Still listed as operating in the 1950 edition of Film Daily Yearbook with a Sunrise Highway address. It was demolished in around 1959/1960 due to a Long Island Rail Road grade crossing elimination project.

According to data from the Freeport Historical Society the theatre began operations in 1912 and was run by Charles and Jennie Reitmeyer. Over the years the theatre was renovated several times. While it didn’t start out as white it was painted in later years. As a wooden structure adjacent to the railroad tracks the building was known to shake when a train past.

In later years it was operated by Dr. Frank Calderone along with the Mineola and Westbury Theatres.

It’s final use before demolition, due to a grade crossing elimination project in 1959-60, was as a music school.

Incidentally, the name Grove Street was retired when the thorofare was renamed after local luminary and band leader Guy Lombardo.

Surprised to learn that Century managed this for a time. In the comments section for some other theatre it was noted in the Box Office for 1938 that among the managerial changes within the Century Circuit Howard Weiss, Asst. Mgr. of the Fantasy in Rockville Centre became the manager of the Plaza.

Uploaded a photo from the September 1920 Paramount Week announcing the Plaza as being among the participants in the exhibiting event.