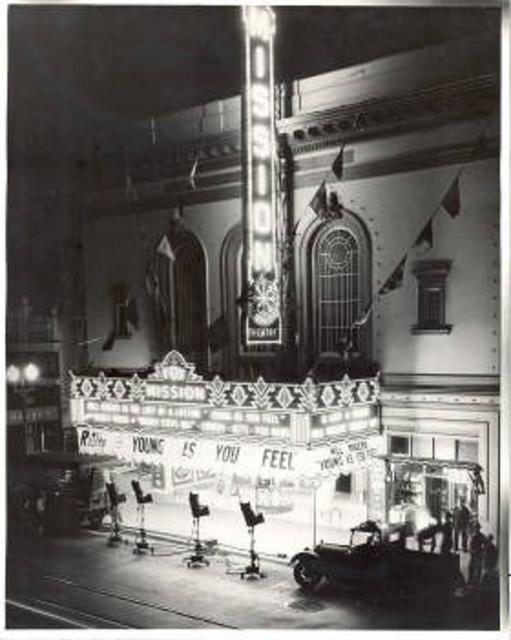 The work of local architects William Binder and Ernest Curtis for the T & D Theatres circuit, the 1,350-seat Theatre De Luxe opened on August 14, 1913 with James K. Hackett in “The Prisoner of Zenda”. It was equipped for both movies and vaudeville. It had a balcony, and a rectangular proscenium flanked by Ionic pilasters. It was equipped with a Kimball organ.

When the T & D Circuit became part of West Coast Theatres, the Theatre De Luxe was renamed California Theatre, and given one of the West Coast chain’s lightbulb poppy-bordered vertical signs.

It underwent a modernization of its façade and signage in the late-1930’s or 1940’s. When the Consent Decrees were finalized in the early-1950’s, Fox, which by this time had a near monopoly on the best theatres in Downtown San Jose, had to divest themselves of one house. The Fox Mission Theatre was chosen–it has been rumoured–because the structure was mainly built of wood and had termites!

The theatre went to United Artists, who were soon ordered to close it – Fox having the last laugh – due to the termite problem. The theatre was demolished in the early-1950’s, except for the reinforced concrete stage-house, which stood for many years after that as a storage facility until the redevelopment of downtown began.

Ironically, in the early-1990’s, an astonishingly stark multiplex, operated by United Artists was built partly on the former Fox Mission Theatre site. Fox, now long gone as a theatre chain, still has the last laugh, however. The United Artists ‘plex was a failure, and closed after only a couple of years.

Update on the “astonishingly stark” multiplex erected on the site of the Fox Mission: Locally owned and operated Camera Cinemas is going to be reopening it very soon. I’m hoping that their budget includes some nice eye-catching details which will relieve the poor building’s “gentrified cellblock-meets-the Great Glass Elevator” appearance.

The Camera 12, (former United Artists Pavilion) which occupies part of the footprint of the vanished Fox Mission, is now open.

Does anyone know where this theater was in San Jose? It doesn’t look like the Fox Mission or the Fox Padre. Thanks.

It turns out to be the CALIFORNIA Theatre. See www.shomler.com for photos.

This theatre was indeed called the California after it was called the DeLuxe. However, as soon as the “new” California was built in 1927 (the one that is now restored and is featured in the Shomler photos mentioned in the above comment), this theatre became the Mission, and remained so until its 1953 closure and subsequent demolition.