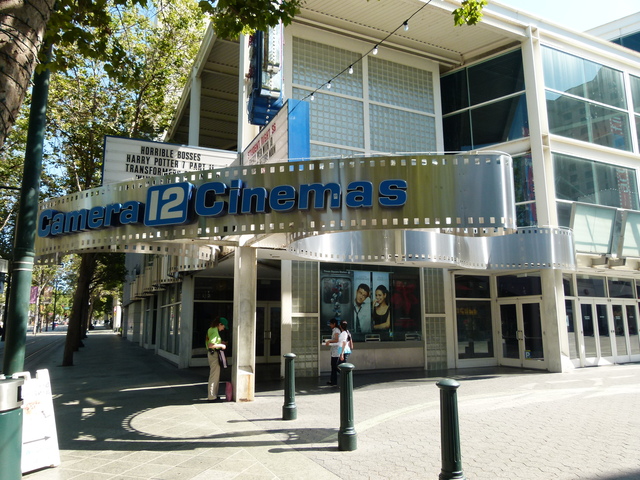 The Pavilion Theatre 8 was intended to boost revenue in downtown San Jose. It was built using funds from the redevelopment agency and opened February 1, 1996 by United Artists. Seating was provided for 3,700, The theatre was not as successful as anticipated. After six months of operation, the United Artists chain announced they wanted to vacate the property. Three years later, with no warning, UA packed up all the equipment (in the middle of the night) and closed the theatre.

A May 2002 article in the San Jose Mercury news indicated that San Jose based Cinelux Theatres was interested in re-opening the theatre.

It was reopened as Camera 12 Cinemas on June 18, 2004 with a reduced seating capacity of 2,100. It was closed September 9, 2016 and converted into office & retail use with a miniature golf course.

This re-opens today as the Camera 12. Most of the grand opening features are first-run Hollywood product, one of the screens is showing arthouse product.

The Camera One is now closed. The Camera 3 is still open for the time being.

This theater is again in severe financial straits, but the City of San Jose is trying to extend it a lifeline: View link

[quote]
This theater is again in severe financial straits, but the City of San Jose is trying to extend it a lifeline: View link
[/quote]

I’m posting a little over a month after the above post. Does anyone happen to know whether the city was able to extend the lifeline mentioned?

Speaking as a taxpayer, I’m conflicted; I like the Camera Cinemas guys. OTOH, the City of San Jose’s Redevelopment Agency (RDA) contributed $4.6 million to the $11 million theater project when the UA tried to make a go of it. Then, when the Camera Cinemas took over, the RDA loaned -them- another $3.2 million, making a total of $7.8 million in taxpayer funds poured into a theater that, according to DKelley’s post above, “face[s] over 150 screens in direct competition within a 10 miles radius.”

I have to ask: am I missing something here? Or is the idea of pouring more taxpayer funds into a theater that’s been a money-losing proposition for more than a decade under two different owners as bad as it appears?

I also couldn’t help but notice that the Mercury News article made no mention of any RDA plans to perform a cost/benefit analysis so that the city has at least a vague idea of how much cash Camera 12 brings into the surrounding businesses. In other words: the RDA is simply -guessing- that Camera 12 serves as an “anchor” for the businesses in the area, but are either unable or unwilling to express the impact that Camera 12 has in terms of a dollar amount.

I know this is going to sound unkind, but: if the RDA is unable to quantify the financial impact that a business has, then how do they have any way of knowing what they are talking about? Ask yourself: wouldn’t a bank want to know this kind of information before extending -another- loan to someone who can’t pay back their original loan or make their rent?

This from a city that is running “a second consecutive budget deficit of more than $100 million.” Maybe it’s just me, but that sure doesn’t sound like a city that can afford to keep making poor financial decisions. Â¬_Â¬

I just looked at Internet Archives Wayback Machines camera cinemas website for May 2004 and it said that this opened on June 18th, 2004.

I meant that that version of the website that I looked at said it would open on that date, and versions after June 18th, said that it was opened.

The public never did support this former UA cinema. Most of the auditoriums are very small. Now downtown SJ only has 1 cinema left a dome Imax type. Time again for a new theatre player to get involved. Maya Theatres maybe? Turn It into a larger 8 plex with large curved screens and better seating and showmanship curtains. Have food and live entertainment also. Being that the greedy property owners were about to raise the rent now they will suffer with a closed cinema for many years without rent money coming in.

Looks like the property is being gutted for use as retail. There go the remodeling plans. While it does sadden me, it’s most likely the next logical step to do. https://www.mercurynews.com/2020/02/28/700-million-for-downtown-san-jose-starts-with-camera-12-office-retail-project/

Also, like I said in my comments from years ago, this theater opened on June 18th 2004, as shown on archives of the Camera Cinemas website on the Wayback Machine at the Internet Archive.

Actually, looks like it’s new use will also be for office space in the brick section, former home to the upper-level theaters (7-9 on the 2nd floor & 10-12 on the 3rd as the 12; dunno about the original theater numbers back when it was owned by UA).

Did some more research on the theater. Looks like at one point, an “indoor amusement center” was planned for a section of the theater, but either never came to fruition, or opened, with information lost to the past.

UA actually said that they wanted to vacate the premises a handful of times, with September 1999 being an original date they planned to leave, but never did, due to unknown reasons.

However, in mid-January (15th or 17th) 2000, movie patrons arrived to the theater, only to be told that the theater was “experiencing technical difficulties, and was planned for a remodel”, as police vehicles surrounded the cinema, while movers ripped film projectors and seats out of the theater and shoved them into trailers.

After closing as the Camera 12 in September 2016, Urban Catalyst is currently gutting and restructuring the theater for office and retail, and a recent post from earlier this month suggests that a handful of equipment left behind by Camera Cinemas has been given to the nearby 3Below, which replaced the Camera 3 in 2018.