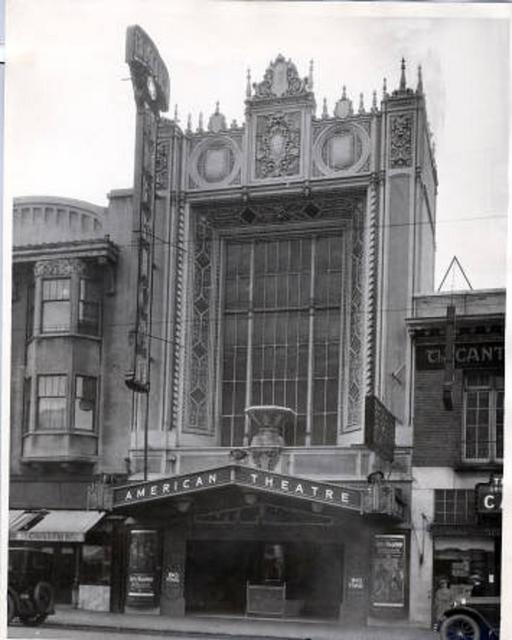 The theatre was later renamed American Theatre, but it spent many years (in an Art Deco reincarnation) as the State Theatre, and finally the UA Theatre, with a towering neon vertical sign much like that of several other UA houses, most notably that in Berkeley.

The theatre was entered through a long narrow lobby structure, with the auditorium occupying a large plot of ground in the center of the block. The UA was demolished as part of downtown redevelopment, and though the Binder & Curtis-designed Montgomery Hotel adjacent is undergoing restoration, the site of the UA Theatre has sat empty for over twenty years.

Just remember it being a nice theatre with ‘UA’ Marquee. Saw ‘The Longest Day’ there, in the early ‘60s. Sad to see/hear so many of these great 'houses’ gone with the wind. lol. ‘Progress’‘n 'Time marches on’, I guess. They jus' don’t make’m like they used to!

There was another United Artists theater in San Francisco, also called the Imperial. I didn’t see a listing under either name:

Ken: The Imperial/UA is still operating as the Market Street Cinema.

The United Artists was a beautiful theatre. I attended it in 1974 for a spanish film festival. This festival, in connection with the Plaza Theatre in Oakland, and the Oakley Theatre in Oakley California, was quite successful. The vertical was spectacular with U.A. flashing in red and blue neon. The interior was gothic, but what i remember most was the ceiling with a beautiful light fixture, shaped like a red diamond recessed. The Fox just down the street was closed. It continued to show spanish movies for awhile, however I don’t remember when it closed. Gone but not forgotten!

This theater opened as the Hippodrome. The new theater was the subject of a brief article, with four photographs, in the October, 1919, issue of The Architect and Engineer, available to read or download at Google Books. The article begins on page 83.

The American Theatre in San Jose was mentioned in the August 17, 1929, issue of Movie Age. The earliest mention of the State Theatre in San Jose that I’ve found is in the July 23, 1938, issue of Boxoffice, in an item headlined “Good Business Follows Renovation at San Jose.” The item mentions that the house had previously been called the American, but doesn’t mention the earlier Hippodrome name.

The earliest mention I’ve found of the United Artists in San Jose is from the November 24, 1951, issue of Boxoffice, which names a number of movie stars scheduled to appear at a benefit premier to be held at what the item calls “..the new United Artists Theatre….”

A bit more detail of the early history of the house was revealed in an article in the February 3, 1945, issue of Boxoffice. This article said that the theater was built in 1918, and originally operated by the San Jose Hippodrome Company. Before 1925 it was acquired by the Liberty Amusement Company, which changed the name to American Theatre. It was then leased to National Theatres in 1925, the lease was sold to Redwood Theatres in 1933, then taken over by St. Claire Theatres in 1934. That must have been the company that did the 1938 renovation and renaming. Finally, in early 1945 the theater was sold to a group of San Francisco investors operating as San Jose State Theatre, Inc. (the subject of the Boxoffice article.)

I should note that the article I cited in my previous comment is in the December, 1919, issue of The Architect & Engineer, not the October issue. Here’s a direct link. Scroll up one page for a photo of the facade. Four interior photos are farther down, following the article text.

I’m trying to confirm a Ted Healy (The founder of the Three Stooges) appearance (possibly under his birth name of Ernest, or Lee, Nash) in a show titled “Just a Laugh” on July 7, 1920. Please email me at Thanks, Frank Reighter

I used to change the marquee on this theater. I got $7.00 each time I did it. That was big money back then but then I had to get up this big ladder. I don’t know how I did it but I did. It was fun. That was back when I was 18.

Wow jon62, I remember back then that was a huge Marquee. Maybe it was you I saw up there from time to time and said I hope he knows what he is doing. lol