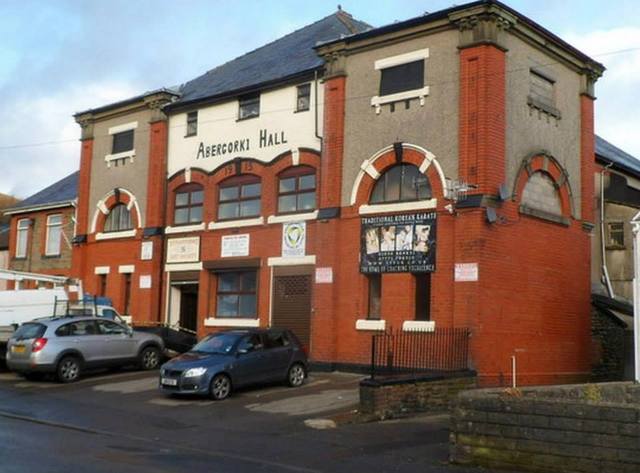 Located in the Rhondda Valley in the Abergorky district of Treorchy. This miner’s welfare hall was built some time around 1910. By 1937 it was opewrating as a cinema on the W.E, Willis Circuit out of the Globe Cinema, Penlyn, Cardiff.

The building was a multi-purpose hall with facilities for dancing as well as for theatre and cinema. It was being used mainly for bingo post-1964. The cinema went out of use in the early 1970’s.

Errors have been made when transposing my original entry. The Rex Willis circuit did not have it’s offices in the Globe Cinema although the Cardiff Globe was a part of their cinema empire. The Globe cinema stood on a corner site at the junction of Albany Road and Wellfield Road.There was a small office space in the Globe that was only used by the manager. The Willis offices were actually located in the first house in Wellfield Road. This just happened to be next door to the Globe. The correct spelling of “Penlyn” should be Penylan.

The hall has received much renovation and continues to be used as a community centre. It is not known if the hall has retained it’s capability to present film and theatre shows.

The venue started film shows fron at least 1924 when being run by Abergorky workmens Hall Ltd under resident Manager Fred Wiltshire. Programmes were continuous at prices of 3d to 8d. W.E. Willis had takenover by 1938 when 600 saets were noted with an R.C.A/ sound system providing the sound. Seating had been reduced to 503 seats by 1951 (reason unknown) when prices were 10d to 1/9d.

I do not know if this is just a plan or if the redesign has been executed, but this architect’s site has a slide show of what the firm designed for a conversion of this venue (mouse over the word “Description” to see the slides).