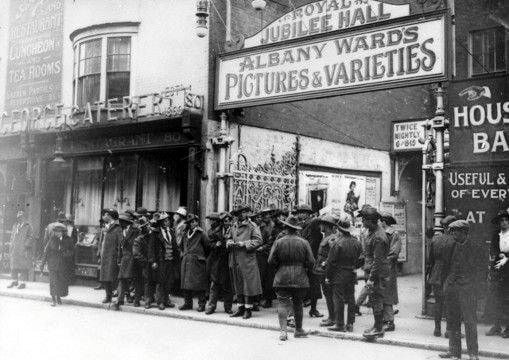 This venue which was situated in St Thomas Street in Weymouth town centre had a long and chequered history.

Designed by architecxtural firm Crickmay & Sons, the premises were originally known as The Jubilee Hall and it was presenting film shows by Albany Ward’s Imperial Electric Pictures as well as live entertainment as far back as 30th January 1909. Throughout the 1920’s it went through several name changes (as it would throughout its life) including The Royal Jubilee Hall and The Opera House.

In 1926 extensive building work and alterations were carried out on the site under the supervision of cinema architect William Edward Trent. The new look theatre included a balcony lounge, a cafe, dance hall and two boxes in the auditorium. The proscenium was 38 feet wide, the stage 30 feet deep and there were eight dressing rooms. Seating capacity was for 1,400 in stalls and circle. The projectors used were Gaumont Kalee-21’s. The venue re-opened as the Regent Theatre under the ownership of Provincial Cinematograph Theatres(PCT) on 2 August 1926 with a live show entitled “Welcome Home”. The first film was Elaine Hammerstein in “Parisian Nights” screened on 8th August 1926. PCT were taken over by Gaumont-British in the 1930’s and the site was renamed as the Gaumont on 26th February 1951.

On 22nd September 1968, it was re-named Odeon. (The Rank Organisation had previously had their original Odeon in Gloucester Street, which they sold to the Classic cinema chain in 1967).

Subsequently the Odeon became the Top Rank Club, which lasted until 8th February 1976 when The Rank Organisation leased the site to CC Leisure Ltd. who renamed it as The New Invicta Cinema & Bingo Hall.

However, this only lasted for little under a year due to poor public support and the site was closed on 29th January 1977. The last films screened here were “The Language of Love” and “Blue Sextet”. The building operated as a bingo club from 7th April 1977, and was closed and demolished in December 1989. The site became a car park and by 2004 the area was re-developed as Debenham’s store and other retail shops.

A close-up of the Odeon entrance, St Thomas Street in December 1970: http://www.mawgrim.co.uk/cavalcade/weymouth2.jpg