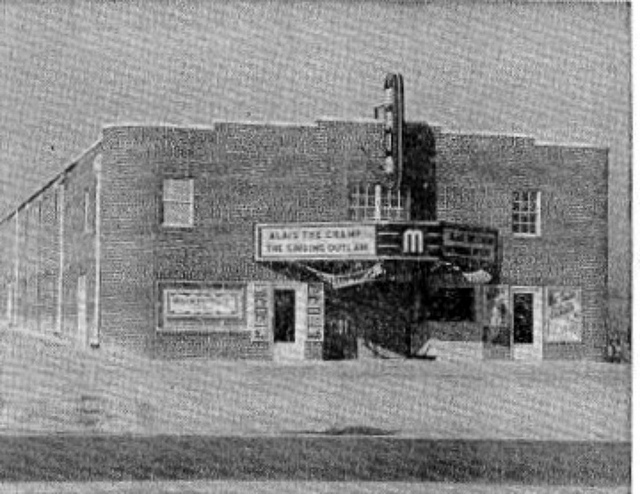 The Main Theatre opened in the early-1950’s and closed in the mid-1960’s and had a seating capacity of 594 seats. It was managed by one of my relatives Mark Sloop now deceased

The building that used to be the Main is now occupied by a shoe store this is a picture of the building.

Crime in Kannapolis, from the Daily Independent in February 1956:

Cecil Corriber of Landis told North Kannapolis officers shortly after 7 o'clock Saturday night that he came out of the Main theater and found two men removing a case of motor oil from his parked car to a nearby car belonging to them. Upon investigation he discovered other items from his car that had been transferred to the other car, he said, and while he was placing a call to police the suspects fled in their car. Corriber obtained part of the license number of the disappearing automobile, and the information was relayed to the sheriffâ€™s office in Salisbury by radio.

Sometime later Salisbury police officers found the car parked in a “no parking” zone and, after having it towed away they became suspicious and arrested the men while they were searching for their missing car. North Kannapolis police said the men admitted the theft and told them they had stolen a quantity of tools and other items from a car parked in front of the Dixie theater earlier to the evening. Officers said the men will be served warrants and moved to the Rowan County Jail in Salisbury.

In the December 2, 1950, issue of Boxoffice Magazine, columnist Harry Hart reported on the theater owners convention in Charlotte. One item in his report said “J.V. Dwiggins and H.M. Sloop of the Main Theatres in Kannapolis took this writer to luncheon the first day.”

The earliest mention in Boxoffice of what would become the Main Theatre appeared in the June 28, 1947, issue, which ran an item headed “600-Seat House Planned By Kannapolis Veterans,” which said that construction on the new theater, on Cannon Boulevard at Jackson, would begin in a few weeks.

Construction must have progressed very slowly, as there is nothing more about the Main Theatre until the January 28, 1950, issue of Boxoffice, where it is listed among the 761 new theaters opened in the United States during 1949.

Harry Hart visited the Main Theatre and wrote about his experience in his column in the October 21, 1950, issue of Boxoffice. In that column he mentioned P.G. Overcash, the theater’s bookkeeper; Thurmond Miller, the projectionist; and J.V. Dwiggins, vice president of the operating company. Dwiggins told Hart that “Annie Get Your Gun” and “Stars In My Crown” had been “real theater packers” for the Main.

Please note when Shoe Dept opened this building they restored it inside and out. So this is not the original facade it was originally red brick. It was lot plainer in appearance much like the Dixie on S, main st.

This is an advertisment for the Main theater showing its original facade.

Photobucket doesn’t work so can anyone provide a photo(s)?

SiliconSam: I can see the photobucket photos now and it is quite the building facade.