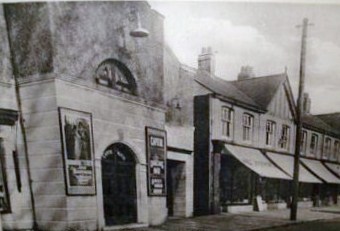 Located in the centre of Ystalyfera. The Capitol Cinema had a typical valleys facade of a Classical style front, hiding a hall that was basically a large shed. It was opened in 1934, and was independently operated thoughout its life.

When Cinemascope was fitted, it boasted a screen 32 feet x 13 feet, fitted inside a 34 feet wide proscenium. In the mid-1960’s, the Capitol Cinema was running bingo and films, and it was still listed in the Kinematograph Yearbook for 1966. It had closed by 1980. A block of flats and residential units named Llys Fredrick Jones was built on the site.

A portion of the Capitol Cinema can be seen on the left of this 1930’s photograph:
View link

The Capitol received its first cinematograph licence in 1934.

I heard today, from an old school friend,that the Capitol was demolished in 1995.

The cinema could seat 720 people at opening at prices of 6d to 1/3d. Programmes were continuous and a British Acoustics sound system was installed. In 1951 this had been replaced by a British Thomson Howell system and 750 seats were now available at prices of 1/– to 2/3d. Prior to 1966 the sound system was changed yet again to a G.B. – Kalee system and programmes were continuous from 5.15pm

does anyone know who ran or managed the capitol during the 1930’s to 1950' Im trying to trace a lost relative who I believe was the owner / manager of the capitol.

pjguy68;The Kine Yearbook for 1937 lists the proprietor as Ystalyera Kinemas Ltd. of Swansea. By 1944, it was operated by Kenmor Kinemas Ltd. (booked at Cardiff) and remained with them until at least 1954.