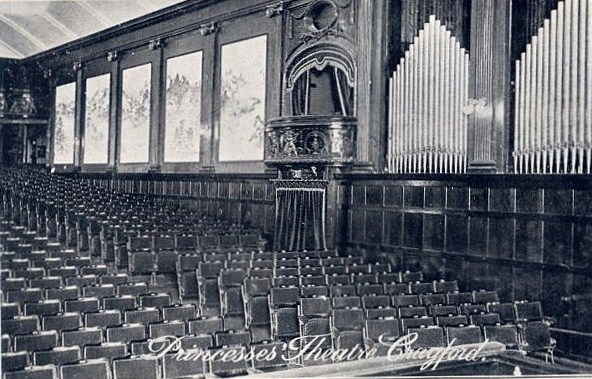 Located in south-east Greater London, near Bexley. Opened as the Vicker’s Works Theatre on 26th July 1916. It was destroyed by fire only a few months later in December 1916. Due to war-time conditions, it wasn’t re-built until after the end of World War I, and it re-opened as the Princesses' Cinema on 24th July 1919. It came under the contol of Sydney Bacon group. In 1935 it was taken over by the Union Cinemas chain. They were taken over by Associated British Cinemas(ABC) in October 1935.

The Princesses' Cinema staged many live shows during 1949 and 1950, before reverting back to cinema use. From 3rd September 1951, the small balcony was closed off to form a larger projection suite, and the seating capacity was reduced to 900 all on the stalls floor. It re-opened as the Ritz Cinema. This was not to last too long as the Ritz Cinema was closed on 1st December 1956 with James Stewart in "The Man Who Knew Too Much" and Edgar Lustgarten hosting "Murder Anonymous". The building was demolished and shops and flats were built on the site.

A vintage photograph of the Princesses' Cinema in 1937:
View link