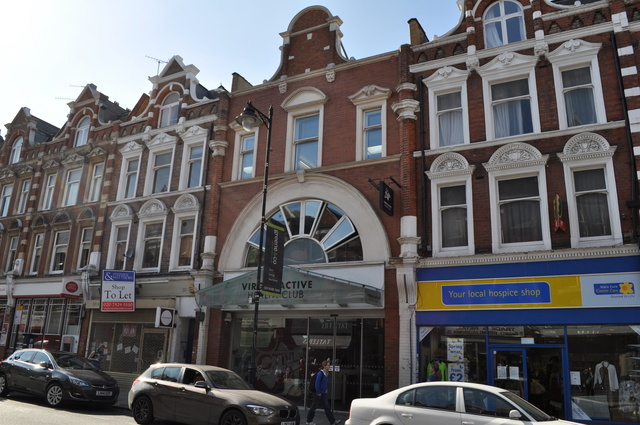 Located in the north London district of Crouch End. Topsfield Parade was built on Tottenham Lane in 1895, as a parade of shops, with flats above. Provision was made for one of the units at number 31 to be occupied as the entrance to a public hall which was built at the rear. The architect was a Mr Woolnow. It was soon redesigned into a live theatre by noted theatre architect Frank Matcham. He designed an intimate auditorium, with seating on orchestra and circle levels and a seating capacity of 1,200. The style of decoration was Victorian, with luxurious decorations by A.K. Dean of Birmingham. The theatre had a 26 feet wide proscenium, a 35 feet deep stage and eight dressing rooms. The narrow exterior had a canopy over the entrance and above this was a large semi-circular window, allowing light into the foyer. The Queen’s Opera House opened on 27th July 1897 with a production of "The Geisha". Several famous actresses appeared at the Queen’s Opera House in its early years; Ellen Terry, Mrs Patrick Campbell and Lily Langtry. On 24th December 1904, during rehearsals for the pantomime "Sinbad the Sailor", a piece of scenery caught fire, igniting stage curtains and drapery. The resulting fire destroyed the stage and dressing room section of the theatre and did some minor damage to the auditorium.

The damage was eventally repaired and the theatre re-opened on 4th January 1907 as the Hippodrome Theatre, presenting vaudeville, with occasional plays. In 1910, projection box was added, with alterations carried out by the architectural firm Norfolk & Pryor. On 4th August 1913, it ’re-opened' as a full time picture theatre. Occasional use of the stage was made by amateur operatic companies and amateur dramatic groups. In around 1919, some rebuilding was carried out by architect Edward Albert Stone of Norfolk & Pryor.

In 1928, the Hippodrome Theatre was taken over by the Gaumont British Theatres chain. They employed architect William Edward Trent to make alterations when sound was added in 1929. Seating was reduced to 1,000. At the end of April 1942, during the height of World War II, it suffered from a major fire and was closed permanently.

In 1948, a dancing school occupied part of the building, and in the early-1950’s it was being used for storage. On 20th January 1958, Grattan’s mail order company took the building over and removed all the remaining decorative features, using the building as their London distribution point. They covered the facade in black tiles.

After many years, they vacated the building and the remaining part of the auditorium was demolished, leaving the facade and foyer intact. In the early 2000’s, local conservationist’s succeeded in having the black tiles removed from the facade, revealing the semi-circular glass window which has been modified and restored. A health club/gymasium was now operating on the former auditorium site, using the Hippodrome Theatre’s original entrance. In 2009 it is a Virgin Active gym.

A photograph of the former Hippodrome Theatre’s facade that I took in October 2004:
http://www.flickr.com/photos/kencta/3515058173/

Some memorabilia and photographs here:
http://www.arthurlloyd.co.uk/CrouchEnd.htm

Have placed an early picture of the Facade.. Which shows it was far higher then it is to-day