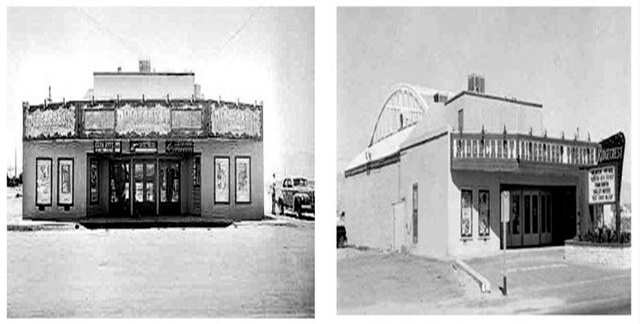 Plans for the Ridgewood Theatre were announced in Boxoffice magazine on March 29, 1945. At a cost of $40,000, it was to be a 60 x 130 building of concrete block construction. Initial plans were for 830 seats with 300 parking spots. Construction was very rapid as the theatre opened in July of 1945.

There were high hopes for the city of Ridgecrest at this time as the Navy had just announced that it was going to make the China Lake base permanent, which would greatly increase the population.

Its isolation from other major population centers Bakersfield, 114 miles away and Los Angeles, 155 miles away, and in the pre-interstate highways days probably insured that the Ridgecrest Theatre had no competition. In fact the Ridgecrest Theatre was listed for many years in the Los Angeles Times independent theatre guide and they showed many films at the same time as the major Los Angeles first-run houses, of course for a shorter period of time. This may have had something to do with the fact that Evert R. Cummings, its owner, was a theatre veteran. Cummings, whose career dated back to at least the 1920’s, was at one time district manager for Tri-States Theatres in Omaha, Nebraska. Stories abound in old Midwest newspapers about Cummings showmanship. It was said he also operated theatres in Oregon at one time. When he came to California he owned theatres in Norwalk and Downey and in 1952, he built the Crest Drive-In in Ridgecrest.

On January 10, 1957 the building was remodeled, redesigned to the plans of architects Draver Wilson & Clarence J. Smale and renamed to become the Ridge Theatre. High-desert-memories.com, a local web site, says it was remodeled two times and has posted three different views of the theater spanning the years. (For the history buff, High Desert Memories has dozens of other historic photos and stories of Ridgecrest).

The date of demolition of the Ridge Theatre is not known but today a Burger King occupies the location.