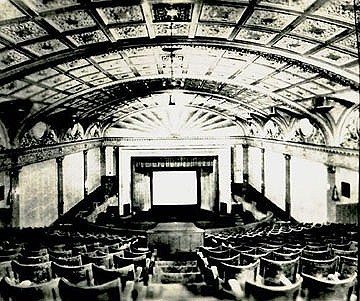 Originally opened as the Royal Assembly Hall some film shows were held in the building at the turn of the 20th century. It had two entrances, one on Ocean Road, the other on Mile End Road. Both these entrances led to the auditorium at the rear and were connected to it via small bridges over a narrow alley.

It opened as a full time cinema known as the Scala Cinema on 4th October 1920, after alterations and re-modelling had been carried out by architects Pascal Joseph Stienlet & Herbert Selwyn Dixon under the supervision of architect Jos H. Morton. Operated by Black’s Theatres circuit, the Scala Cinema was taken over by General Theatre Corporation(GTC) in March 1928. In May 1928, they were taken over by Gaumont British Theatres chain. One of the facades was altered in 1938.

It was re-named Gaumont from 12th March 1951, and the Ocean Road entrance was closed in 1960, and was converted into retail use. The Rank Organisation disposed of the Gaumont to the Brent Walker chain of cinemas from 5th October 1975 and it was re-named Focus Cinema.

Taken over by an independent, it was re-named Regal Cinema. Converted into a 3-screen cinema from 24th May 1980, it now had seating capacities for 329, 74 and 74. The two small screens were video presentations. This was a short lived venture as the Regal Cinema closed on 26th June 1982.

The building became a bingo club and amusement centre from 19th June 1984. It has since been converted into a nightclub, going through several owners and name changes; The Venue, Masons, Coyote Wild and Vibe.

Peter Lish left the ABC South Shields in July 1980 and I (who had followed him into ABC Sunderland as A/M) took over as Acting Manager, subsequently Manager until I handed over the theatre to Peter MacRae, CEO of Brent Walkers Cinema Division, in May 1981. I knew Peter MacRae from his ABC days when he was Manager at ABC Bradford and it was quite a pleasant hand over.

I remember there was a rather surly Internal Auditor who had managed the old Grimsby Odeon, a venue which Brent Walker very quickly disposed of. I suspect that his dour demeanour may have been exacerbated by Peter MacRae’s statement to his District Engineer, a pleasant, avuncular chap whose name I do not recall,viz:

“I told you that you would find this as an ABC Theatre to be in better condition than the Rank places we took over!”

I felt like saying that they must have been in one hell of a state because very little money had been spent on the ABC South Shields for years – see my article about the Savoy (ABC) re the reasons for this.

Peter did indeed die at an early age a few years ago and I am now the only remaining member of the team at the Haymarket Newcastle where I first met him in the early 1970’s………..

Hmm Peter MacRae’s nickname was Kipper.. I witnesed the disposal and Transfer of The Focus Skem..

Peter Lish (as opposed to Peter MacRae) died a few years ago – just in case there is any confusion. I trust that Peter MacRae is still alive and well.

Hello Terry, I had forgotten that you had taken over the management of the ABC South Shields after Peter Lish had left. I had thought I was right in thinking Peter has died but pleased you confirmed this, although not that Peter had died. Did you also manage the ABC Westgate Road?, I believe I can recall seeing you FOH. I had forgotten about Peter MacRae and didn’t know of his nickname.I didn’t have much dealing with him during my time of employment with Brent Walker.

I have only just stumbled upon your response; in the past ‘Cinema Treasures’,via the linked e-mail address, would advise me of a reply to a comment only for it to be merely an additional observation added by someone. Ironically,in this instance,they did not bother………..

Anyway, I did indeed manage the ABC Westgate Road, having transferred to Newcastle upon Tyne (initially at the Haymarket Theatre)from the ABC Chester which I managed subsequent to ABC’s disposal of South Shields. I did for a brief period look after the two large Newcastle venues simultaneously.

I would not enjoy working in film exhibition these days as I detest the multiplex format. They may be comfortable and have good sound with digital stereo but are otherwise soulless. In relation to the sound I perhaps should substitute ‘loud’ for ‘good’ and utilise the expression ‘over the top’ to describe the digital stereo. The loudness is often necessary to compensate for bad audience behaviour in the unattended auditoria whilst the digital stereo is perpetual and unrelenting.

I recall with affection the 70mm venues which ABC had in most major cities. 6 track magnetic stereo was used in these situations. The concave screens would vary between 50' and 90' in width whilst the principle of ‘less is more’ was the order of the day in the case of the stereophonic sound. By that I mean that the stereo effect would only be used in scenes where it would best enhance the image on the screen; it was indeed spectacular used in this way.

A handful of wonderful venues exist today (mainly independents) whereby the atmospheric ambiance of the old time cinemas is combined with modern seating, configuration and amenities. The Plaza Stockport, Rex Berkhamstead and the Odeon Leicester Square (probably the last Odeon theatre to use house and screen tabs in addition to retaining its Compton Organ) would perhaps best exemplify the types of theatres to which I refer.

Hello Terry, I have only just read your message on facebook and fully agree with every comment you have made, albeit, I am still a keen cinema goer so still attend the Odeon Metro Centre very regular but tend to often pull the presentation to pieces, especially when they decided to stop using the masking, leaving it in the scope setting regardless of the format they were showing, although I’m glad to say they seem to have started to use this again feature again.The new digital projection is amazing too but sadly its invention has come at great cost to projectionists as they are no longer needed, although I think that the employers are a little rash disposing of all the years of experience as the system isnt as easy to use as they would have us believe and I know they will have a need for the experienced staff they have chosen to make redundant. I read recently that 2 long time projection employees in the North East have been made redundant after approx 40 years of service each, very sad. I used to so love to see 70mm presentations at both the ABC Westgate Road and especially at The Queens with its Cinerama screen and both with lovely house curtains. Like you, I resigned myself to knowing I wont ever have the pleasure of working in such lovely picture palaces again, even the grottier sites I ahve worked at such as the former Gaumont in South Shields still had a charm about it that cant be recaptured in the multiplex cinemas. I now have a home cinema of my own, complete with house tabs, obviously but I did go for the digital projection, on that I have to agree does project a better image than the former 35mm systems that I loved working on, but sadly film scratched although have to admit, not on my watch, I cleaned the gate and rollers after every showing. Nice to hear from you Terry and hope youre well.

I remember Peter Macrae and Peter Gibson from Brent Walker coming up to the Gaumont/Focus,nice chaps both of them!

If my memory is right Peter Macrae was assistant Manager at the ABC New Street Birmingham before me..

Why on Earth the independent operator who took over from Brent Walker renamed this place the Regal is beyond me as the Odeon King Street had been Blacks' Regal. It would have been more sensible to give it its pre Gaumont name, Scala. However, very little ever made sense in the cinema world…….

I had trouble remembering the Regal name Terry,and I was working there at the time!