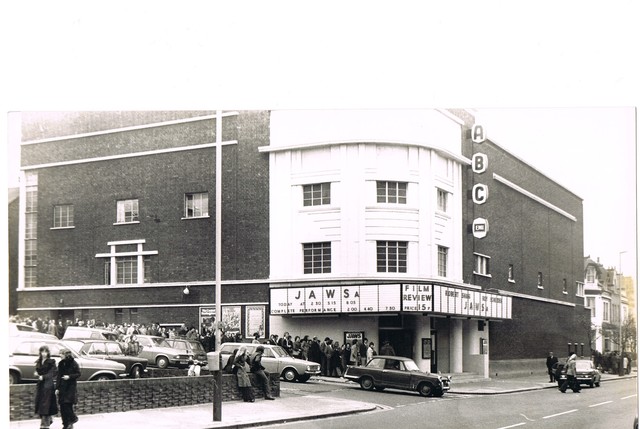 Located on the Northeast corner of Ocean Road and Coston Drive. This purpose built free standing pre-war cinema was built for and operated by Associated British Cinemas(ABC) as the Savoy Cinema on 12th December 1938 showing Bing Crosby in “Sing You Sinners” and Vic Oliver in “Meet Mr. Penny”. It had 670 seats in the circle and 1,060 seats in the stalls, totalling 1,730. There was a proscenium opening of 45 feet and a shallow – but adequate – stage. Interior decorations were by Fred E. Foster of Nottingham. In 1961 the theatre, in line with general policy, was given the corporate name, ABC.

The Savoy Cinema was the second largest cinema in the town (Thomsons' Regent Cinema had 105 more seats, but was an awkward shape as it had to be constructed around retail properties whose owners could not be ‘bought off’).

The Savoy Cinema was regarded by locals as being the most stylish cinema in the town; the Gaumont British house (the Scala Cinema, Ocean Road) was narrow and old fashioned and the Blacks' Regal was a rebuild of the Moss Empire Theatre.

Business was very good and this was always treated by ABC as being one of its most important North Eastern cinemas after Newcastle, Sunderland and Middlesbrough.

In the early-1970’s, when cinema admissions were on the decline, various plans were considered for the cinema’s sub-division, but a sea change was to take place upon the acquisition by ABC’s umbrella organisation, EMI, of Star Bingo and Social Clubs in 1975.

This came about as a result of Star being behind in rental payments to EMI where they operated former ABC cinemas and – in many locations – the stalls area of ABC Theatres for bingo.

Almost immediately the Social Centre Divison (what a euphemism for gambling dens!) started a predatory mission to acquire even more ABC theatres for bingo.

Where possible they requisitioned the entire building (e.g. Kingston-on-Thames, Torquay) but in certain locations a compromise was reached whereby they acquired only the stalls areas of large theatres as in the cases of Plymouth, Wigan and Chester which resulted in the loss of fully equipped stages and live shows.

In the case of the ABC South Shields, the bingo division wanted the entire building as they had identified a ‘bingo culture’ in the town (the Odeon – ex Blacks' Regal, Regent Cinema and many other former cinemas were successful bingo clubs).

From this time onwards, ABC ceased to spend money on the ABC as they feared that the bingo division would reap any benefits. A Bingo licence was applied for – and turned down – many times but the bingo division relentlessly forged ahead, so determined were they to acquire the building.

Bingo never came to fruition but because of the ‘blight’ period, ABC ‘missed the boat’ for conversion of the cinema when the company operating the old Gaumont (Scala), Brent Walker, very quickly- and cheaply – tripled the place.

ABC ‘threw up the sponge’ in 1981 and leased the ABC, which by now was operating at a marginal loss, to Brent Walker who programmed the Savoy Cinema (as it was re-named) in conjunction with their Mile End Road theatre, ie the former Gaumont, now named ‘Focus’.

Brent Walker’s departure from film production and exhibition, a year or so later, resulted in various independent outfits running the Savoy Cinema, but without success.

There were occasional live shows (Sacha Distel, I recall, was one of the bookings) but it was all to no avail and the Savoy Cinema finally closed on 31st December 1984. It was demolished in 1987.

The last time I visited this part of South Shields, a smaller building, the function of which I do not recall, occupied part of the ABC site and the remainder was reminiscent of a W.W.II ‘bomb site’. In 2017 it is an empty plot of land.

I used to work as a Projectionist there in the 80’s until it closed,great looking Cinema in it’s hayday.

Those pictures of the Projection boxes reminded me of our projection equipment at the ABC I was at. We had Philips DP75s Cakestand.. Morganite conversion and those nasty Milbank amps Hmm The automation I think was Gretton-Ward.. All those Fantastic Theatres wreaked by progress.. When I worked for ABC I did Relief Management at 30 plus Cinemas and only 3 I think are still open .. Run by independents..

Yes Mike,I’m glad I took a few pictures when I was at both Cinemas and home video of projection equipment running. Now with most places turning digital we will never see the like again.

Does anyone remember George Curbison, he was my granddad and was one of the projectionists until he retired in the 1970s… be nice to know if anyone knew him!