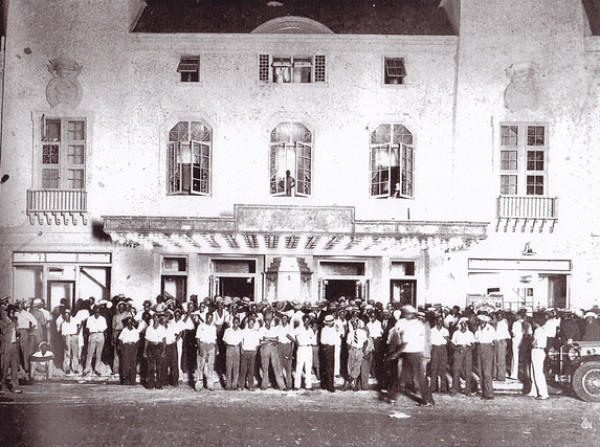 The Strand Theatre opened June 12, 1915 as a legit theatre. It vecame a vaudeville theatre in the 1920’s. It became an African-American movie theatre. The Strand Theatre was closed in December 1968. The closed building suffered a major fire in 1969 and the ruins were demolished.

The 700 and 800 blocks of W. Ashley Street are now part of the campus of the LaVilla Middle School of the Arts. The Strand was one of three theaters serving the African-American neighborhood of LaVilla, which is now mostly gone. The Strand Theatre was also demolished for the school project, while the Ritz was partly demolished and rebuilt behind its historic front.

The Strand is one of the theaters documented in The Lost Theatres of LaVilla, a history of Jacksonville’s African American entertainment district.

H. S. Walker’s Strand Theatre opened with a performance by the Russell-Owens stock company on June 12, 1915. It operated primarily as a vaudeville house through the 1920s, booked by the Theatrical Owners Booking Association. After the vaudeville era ended, the Strand continued operation as a movie house under the control of National Theatre Enterprises until December, 1968. The next year the vacant house suffered major damage in a fire and was subsequently demolished.