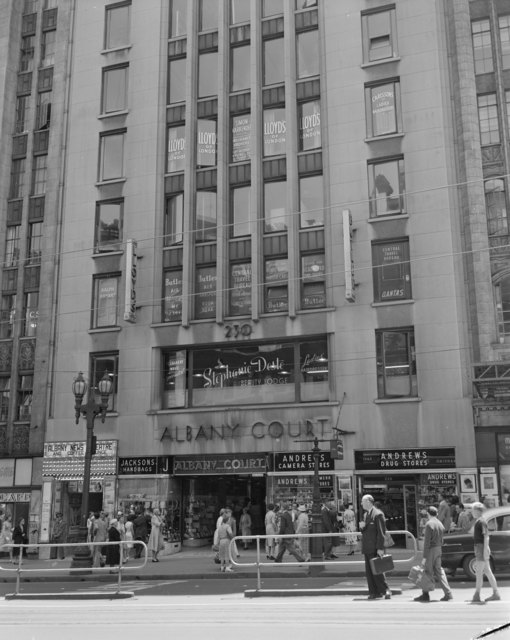 Did it ever screen the movie “Goldfinger”?

Why the Albany part of the name?

davidcoppock “Goldfinger” never played at the Albany although some early Bond films “Dr. No” and “From Russia With Love” did on re-issue. Perhaps the Albany’s greatest claim to fame was in November 1967 when, following a refurbishment, premiered the cult classic “Cool Hand Luke”.

The proposed Albany Theatre was part of THE HOWEY ESTATE BUILDING PROGRAM and was built into the basement of Albany Court, located in 230 Collins Street, Melbourne, Victoria The ground floor of the building had been designed as a shopping arcade extending from Collins street through to Howey place. There are seven shops in the arcade, and two in Collins street. A bright and attractive appearance has been given to the show windows by the use of stainless steel moldings.

The basement of the building will be occupied by the Albany Theatre and a modern coffee lounge, both under the same control. Air conditioning to be provided in both the lounge and the theatre. The decoration follows the modern horizontal treatment. The special furniture in the lounge and theatre has been designed by the theatre architects Messrs Taylor, Soillieux and Overend. The operating bio box is situated at the Collins street end and has natural light from pavement lights above. The seating Capacity at the time of building was 268.

The projection equipment has been installed by Harringtons Limited. The sound is the Australian made Racophone. A central heating ventilating and air conditioning system has been carried right throughout the building. A system of 12 vertical utility ducts runs from the basement to the roof, each duct carrying the hot and cold water mains the radiation, and gas services. All the equipment operating these services is a sub-basement, and with the general and sanitary plumbing formed part of the contract of Messrs Thomas Warner and Sons, of South Melbourne.

The boiler operating the hot-water and heating service is fired by a fully automatically controlled fuel oil burner which was installed by Major Furnace and Combustion Engineers Pty Ltd of South Yarra.

The Albany opened as a newsreel theatrette screening continuously every hour, on October 30, 1936. The original Exhibitors were Woodrow and Sloman – Contributed by Greg Lynch –

The Albany opened as a Newsreel Theatrette screening continuously every hour, on October 30, 1936

NEWSREEL THEATRETTES* These were scattered around central Melbourne, and first appeared in 1932. Most were below street level.These establishments screened continuous newsreels from Movietone, Universal & Cinesound, along with cartoons, Pete Smith & Three Stooge comedy’s – to name a few . There were no intermissions and it was possible to sit there all day! – Contributed by Greg Lynch –

Although now remembered as an “Adult” cinema, there were some important releases. “Cool Hand Luke” premiered here along with the Roma cinema in 1967. It became an important “move over” venue for many important features.