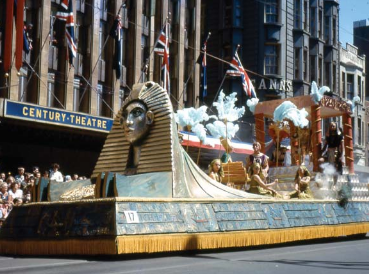 The Century Newsreel Theatre was opened on 26th June 1940, located in the basement of the 14-storey Century office building designed by architectural firm Marcus R. Barlow & Associates. The Century Newsreel Theatre was designed by architectural firm H. Vivian Taylor & Soilleux in an Art Deco style. The ceiling had stepped bands containing concealed lighting and the side-wall had a sculptured bas-relief feature of two youthful ‘Aryan flying ladies’ (similar to those in the Odeon Leicester Square in London, England). In 1958 it was re-named Century Theatrette.

In December 1965 it went over to Continental European feature films and was re-named New Century Theatre, screen films such as Claude Lelouche’s “A Man and a Woman” (Une Homme et une Femme) which ran for over a year. In the 1970’s the auditorium was draped, covering the original decorative details and it was re-named Swanston Cinema. In 1980 it became screen 2 for the nearby Capitol Theatre and was closed in November 1985. It was converted into a nightclub named the Hi-Fi Bar & Ballroom.