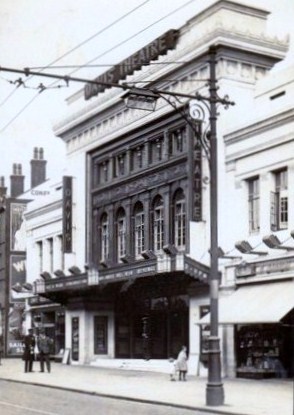 The Davis Theatre was built and operated by the Davis family, with Israel Davis at their head. It was their tenth cinema, with earlier ones being the Brixton Electric Pavilion (still operating today as the Ritzy Cinema), and including the Pavilion’s at Marble Arch and Shepherd’s Bush.

The Davis Theatre opened on 18th December 1928 with the British Premiere of Emil Jannings in "The Last Command". Seating was provided for 2,200 in the stalls, 225 seats in the Royal Circle at mezzanine level and 1,500 seats in the balcony. The projection box was located at the rear of the Royal Circle mezzanine, to enable a straight throw onto the screen. The theatre had a huge stage which was 30 feet deep, and there were six dressing rooms on three floors, that could accommodate up to 110 artistes. It was equipped with the largest Compton organ ever built, which had 4Manuals/22Ranks, opened by organist Alex Ferguson-Taylor. There was also a café/restaurant, which contained a dance floor.

The auditorium had a fine Italian Renaissance style, with Ionic columns on the side walls, along which were Italianate base relief friezes. There was a huge central dome in the ceiling and many early Art Deco style features to the decoration.

One tragic incident, which could have been a disaster happened on the evening of 14th January 1944, when a German plane dropped a bomb on the theatre. It made a small hole in the roof, and landed in the stalls, but didn’t explode. It killed 6 members of the audience and injured 25. There were over 2,000 in the audience that night, watching the supporting feature film starring Joan Davies in "Two Senoritas". If the bomb had exploded there would have been total devastation and many hundreds dead. Damage was only minor, and repairs were soon carried out.

Many live shows were performed at the Davis Theatre, highlights being two performances of the London Philharmonic Orchestra, conducted by Sir Thomas Beecham in January and October 1939. Beecham conducted the inaugural performance of the Royal Philharmonic Orchestra on 15th September 1946. Jeannette MacDonald gave a sell-out concert on 7th July 1946, with other concerts by Maurice Chevalier(1953), Frankie Laine(1954), Gracie Fields(1954), Liberace(1956), Bill Haley & his Comets(1957), Paul Anka(1958) and Mario Lanza(1958). Stage productions include "Peter Pan", "Annie Get Your Gun", King’s Rhapsody" and plays such as "Harvey", "Pygmalian" and "The Second Mrs Tanqueray". The Boshoi Ballet appeared on stage in 1956, and one of the performances was filmed, to be later released as "The Boshoi Ballet".

With the downturn in cinema-going in the late-1950’s and the introduction of commercial television, the announcement came in December 1958 that the Davis Theatre would be closing. Plans were being made at that time to build a new theatre/concert hall in Croydon, to be known as the Fairfield Halls, and the local council tuned down proposals to purchase the Davis Theatre, rather than build their new hall.

The Davis Theatre played its final live performance on 10th May 1959, with a show name ‘Jazz at the Philharmonic’ starring Ella Fitzgerald and the Gene Kupra Quartet. The cinema closed on 23rd May 1959 with a second run presentation of Russ Tamblyn in "Tom Thumb" and "Andy Hardy Comes Home". The theatre contents went to auction sale, and the Compton organ was offered to the council to install in their new Fairfield Halls, but it was refused, and some ranks of pipes were sold to a church, the remainder being split up and scrapped.

The Davis Theatre was demolished in late-1959, and an office block named Davis House and car parking space was built on the site. This was a great loss to the people of Croydon and indeed London, and the new Fairfield Halls, which opened three years after the Davis Theatre closed, cannot even come close to the magnificence of the Davis Theatre.

My aunt Grace Bates used to sing in a band during war time at the Davis Theatre in Croydon. Do you have any information on her?

It was a superb luxury cinema. I went on most Saturdays in the 1950’s and remember Mollie Forbes rising up on the Compton organ playing her signature tune, Elgars ‘Chanson de Matin’ Iwas also there on the final night – a very sad occasion – when organist/manager Reginald Heywood played. It was so shortsighted of Croydon Council not to take over the Davis Theatre or at least purchase the Compton organ

does anyone remember one of the last shows at this theatre called midnight mat. or all night show. My brother remembers goin but cant remember the people in it.Can anyone help.

Hello
I was born in 1941 and went to school in Croydon and worked for eight years at Allers, moving away in 1963 to get married.You can tell your brother that I too was at the Davis that night for the midnight charity show and can remember some of the names on the bill Jimmy Wheeler,Arther English,Avril Angers Ted Ray and Joan Savage.There where lots more but i like your brother after 60 years the old memory begins to fade
Regards Peter

My father belonged to the Bunny Club for children (he claims!). They sang along to “We’re all bunnies, why aren’t you, come and join us, don’t be blue”. It then continues “no need to be a dismal pup”. Does anyone know what comes next? Any more information on the club gratefully received. Brian

My father was chief of staff until the theatre closed, I remember seeing circuses and many pantomimes there for free of course. I was always so impressed either the huge shandileers in the main entrance and of course those wonderful brass twin stairs that went up to the circle Its criminal they destroyed such a wonderful building.