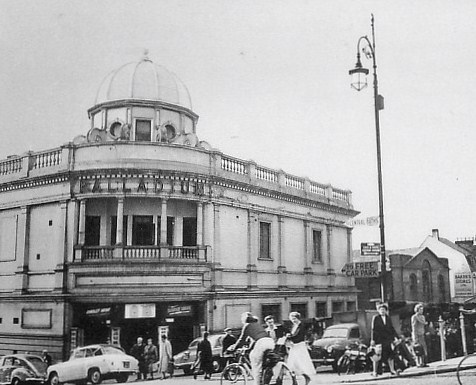 Located at the southern end of Surrey Street in central Croydon. The Orpheum Cinema opened on 23rd March 1914. The imposing building stood on a corner site with Scarbrook Road and had an open verandah with pillars, which led into a tea room at the rear of the balcony. The facade was topped by a dome, which had a figure on its top. Seating was provided in stalls and balcony and there were also private boxes.

It was closed in mid-July 1924 for ‘cleaning and redecoration, but didn’t re-open until 23rd February 1925, when it was re-named Cinema Royal and had a new owner. Equipped with Western Electric sound in May 1930 and another re-decoration, it re-opened as the New Palladium Cinema (the former Cinematograph Theatre/Palladium Cinema had closed two weeks earlier).

The Palladium Cinema was closed on 25th August 1956 with Max Bygraves in "Charlie Moon" and "Double Cross". The buildings central position was ripe for re-development and it was sold (at a very hight price) to poperty developers, and was demolished in October 1956. A six storey office block named Surrey House was built on the site.

A vintage photograph of the Palladium Cinema during its last week of operation in August 1956:
View link