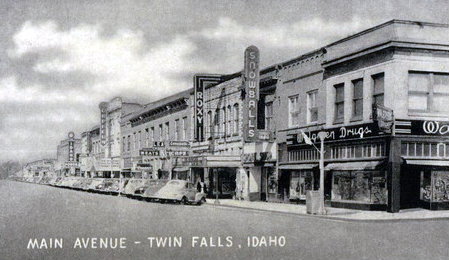 The Roxy did, indeed, show several 3D movies during the 1950s, including “Fort Ti,” “Dangerous Mission,” and several others from Columbia and RKO.
The 3-D experience was probably better at the Roxy than it was at the rival Orpheum and Idaho theaters. The narrow theater made the screen seem much larger than it really was.
The Roxy was fairly late in installing CinemaScope, but when they finally did, it was virtually wall-to-wall. It was flat (the orpheum’s original CinemaScope screen was slightly curved), and the ratio was more like 2:1, but “The Long Gray Line” and “The Eddy Duchin Story” did come off looking pretty good.

I wonder if the owner of the building would do everyone a favor and remove that ill conceived urban renewal crap of a facade off, we might see a handsome real brick and stone facade under there. I never understood the reasoning to cover such craftsmanship with mediocrity.

The 1939 photo of the Roxy Theatre that Lost Memory linked to can now be found at this link.