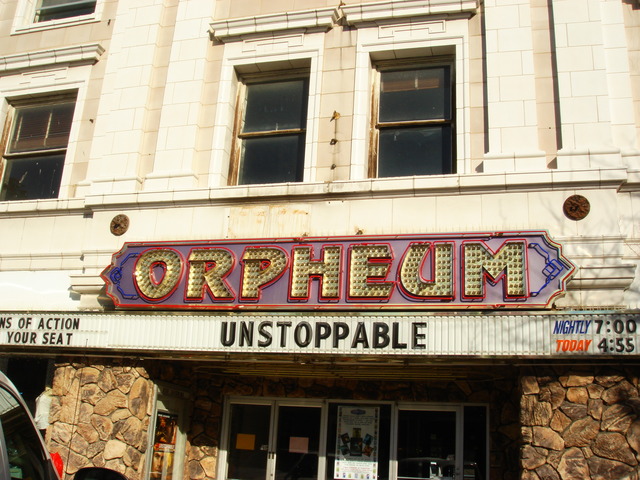 The Orpheum Theatre opened on October 31, 1921, with 900 seats. In 1940 it was remodelled to the plans of architect Slack W. Winburn. In the 1950’s, when it was an Intermountain Theatre, many considered the Orpheum Theatre to have the sharpest, although small, CinemaScope screen in Idaho. This was probably because the projection booth was built downstairs instead of in the balcony, giving a rather short and direct throw.

The Orpheum Theatre still has a very sharp and small picture but when the lights go down in the restored 1920’s auditorium, the walls seem to close in giving a very intimate viewing experience. The balcony is closed now with its approximately 250 seats removed.

In contrast to the auditorium, the concession stand and outer lobby have a clean, contemporary look. It used to have a full marquee and now it has one that sits flush with the front of the building.

In keeping with downtown urban renewal that began in 1970, it was called the Mall Cinema for many years and then changed back to the Orpheum Theatre in the late-1990’s to reflect its location in Historic Old Towne, a part of the Twin Falls Downtown Historic District. The district was put on the National Register of Historic Places in 2000.

Another downtown theater, the Idaho Theatre, was completely demolished. The Orpheum Theatre was last operated by Interstate Amusement and was closed May 26, 2014. Renovations were carried out and it had a ‘soft’ reopening in December 2014. The balcony has been re-opened and the seating capacity is now 465.

Cosmic observation of the day: all of the theaters listed for TWIN Falls…are single screens.

We drove through Twin Falls last weekend (Sunday, June 17), and I picked up a copy of the local newspaper, the Times-News. From the theater ads, it appears that the once stately Orpheum Theatre has been down-graded to a bargain, “dollar house.”

it was originally constructed as a playhouse where obviously they would put on plays. was not a movie theatre to begin with. there are rooms upstairs where it looks like there were apartments or some type of living quarters. wouldn’t be surprised if there were brothels upstairs just like in many of the buildings on main street had.

The author of this article at the web site of the Twin Falls Times-News claims that the Orpheum Theatre opened in its present location in 1918 (he appears to be mistaken- see the final paragraph of our description of the Gem Theatre) after having operated on Shoshone Street North for a number of years. Its original location was on Main Street South, where it opened in 1906.

A gallery accompanies the article, with exterior photos of the Lavering Opera House and the Rialto Theatre, an interior shot of the Lyric Theatre, and an early photo of Main Street that includes the original Orpheum, which was in a tiny, wood-framed building.

In my previous comment I was mistaken in saying that the second Orpheum was on Shoshone Street North. It was at 131 Shoshone Street East, and when the new Orpheum opened in 1921 it became the Rialto Theatre.

The Orpheum Theater’s designation should be changed to “closed, restoring.” A story in the Times-News, Twin Falls' daily newspaper, on Aug. 4, 2014, said that the Orpheum had been purchased by Larry Johnson and his wife, Stephanie. Johnson is president and general manager of Twin Falls-based Locally Owned Radio, a chain of several Magic Valley radio stations. The newspaper article had several photographs of crews of volunteers replacing the 93-year-old theater’s roof. They plan to restore the theater, including replacing the now-vacant balcony, and eventually use the theater for live productions (stage plays, concerts, etc) plus occasional screenings of classic films, such as “The Rocky Horror Show.” For many years, the downtown landmark was considered the showplace of Magic Valley — an area encompassing nine counties in south-central Idaho. The Times-News article said the Johnsons plan to restore the Orpheum to “its glory days,” which would be a real boost to downtown Main Street. — Ivan M. Lincoln

A. R. Anderson was the original operator of the third Orpheum Theatre in Twin Falls, and had operated the second Orpheum and the Gem Theatre as well. He was a regular contributor of capsule movie reviews to trade journals Motography and Exhibitors Herald between 1918 and 1922.

We’re excited to tell everyone that we are open once again with a capacity of 465 seats between our restored balcony area and the orchestra level.

We soft opened in December 2014, and had consistent events in January of 2015. The big parts of the restoration are done, but the fine tuning is ongoing.

Here is the official web site.